Has the mysterious Voynich manuscript finally been cracked?

© Universal History Archive / UIG / Getty images
Mysterious text from the Voynich codex, a brightly illustrated ancient manuscript, may finally have been deciphered, according to a new study from computer scientists in Canada.

For decades codebreakers have poured over the 240-page relict, from which pages have been carbon dated back to the early 1400s. It has been suggested that the manuscript, which is housed at the Beinecke Library at Yale University and contains brightly colored images of plants and an unknown language, is a medieval medical journal for women. 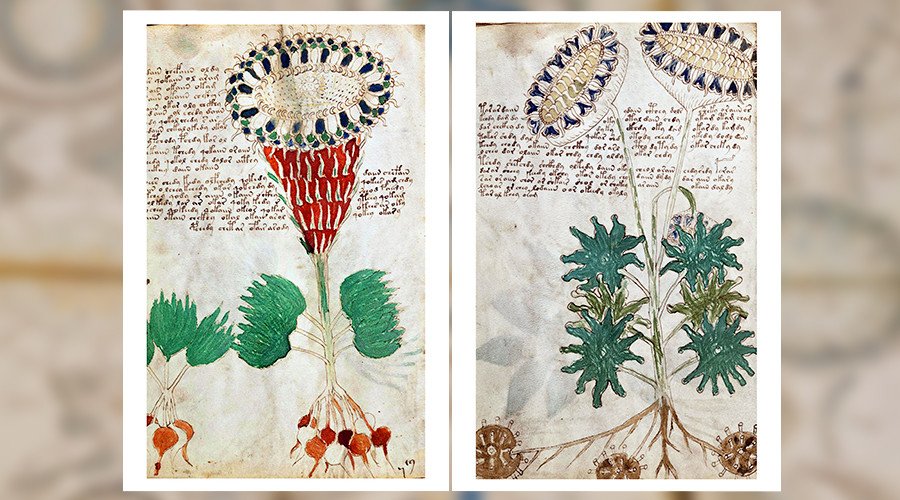 But the purpose of, or information within, the Voynich codex has never been agreed upon by researchers and academics – despite the best efforts of WWII enigma code breakers in Britain. Named after Wilfrid Voynich, the man who brought the text to wider knowledge in the early 20th century, the codex could also be an elaborate hoax, as suggested by Keele University linguist Gordon Rugg.

However, now Greg Kondrak from the University of Alberta claims to have made strides in deciphering the seemingly lost language contained within the codex pages, reported CBC News.

According to the computer science professor, the first sentence of the manuscript translates roughly as: “She made recommendations to the priest, man of the house and me and people.”

“[T]he language is a plausible candidate on historical grounds, being widely-used for writing in the Middle Ages. In fact, a number of cipher techniques, including anagramming, can be traced to the Jewish Cabala,” a research paper by Hauer states.

Other individual words deciphered within the text include ‘farmer,’ ‘light,’ ‘air,’ and ‘fire’.

“The application of our methods to the Voynich manuscript suggests that it may represent Hebrew, or another abjad script, with the letters rearranged to follow a fixed order,” the study concludes.

5 Children of The Evilest Dictators (7 min)

World famous dictators possessed unlimited power: in their sever hands was the fate of not only the state but also of every person who lived in it, including the fate of their own children. Could we say that the tyranny of the fathers didn’t affect their families, and that their children were swimming in rivers of money, love and understanding, while the country was drowning in rivers of blood? Let’s see. Here are five children of dictators and their unenviable fate.

Class struggle never existed without hatred of the poor. And neither has racism.

Boots Riley’s recent article, posted in The Guardian, systematically dispels the myth of black-on-black crime advocated by Bill Clinton. Rather than pointing the image of failure at black people in the US, Riley insists, the mirror should be redirected to class war and the failure of liberal democracy. The condition of black people will advance with economic prosperity, not punitive drug laws.

The attempts to demean black people in the US, while specific to modern racism, has its roots in old fashioned class hatred interwoven within the fabric of western civilization.

Let’s wind back the clock a bit. Black-on-black crime is one of the establishing myths of racialized class oppression, dating to notions of the “white man’s burden.” However, before Bacon’s Rebellion in 1676, when black and white bonded laborers and slaves rose up together, Irish workers in particular were similarly debased and derided by the master class.

Returning back to pre-colonial days, generally speaking, we can pick up on the same narratives that currently keep black people in chains directed against poor whites in Europe. Marx and Engels’s Communist Manifesto compares the contemporary struggle between the proletarian and bourgeois to the plebeians and patricians of Rome, as well as the serfs and lords of the Middle Ages.

Historian Titus Livius tells us of the patricians’ hatred of plebs that prefigured the “struggle of the orders”:

“Appius Claudius, harsh by nature, and now maddened by the hatred of the plebs on the one hand and the praises of the senate on the other, asserted that these riotous gatherings were not the result of misery but of license, the plebeians were actuated by wantonness more than by anger. This was the mischief which had sprung from the right of appeal, for the consuls could only threaten without the power to execute their threats as long as a criminal was allowed to appeal to his fellow-criminals.”

It was not the plebeians’ poverty that drove them to insurgency, but democracy and a sense of entitlement, says Claudius. How could a system function when greedy and licentious plebs had no accountability except to each other? Not far off from today’s discussions of Black Lives Matter that one sees on conservative blogs and comment threads.

Moving ahead to the Middle Ages, the same beliefs found their way to the upper class. The seething hatred of “villeins” (peasants) held  by the nobility comes through in the 13th Century story Le Despit au Vilain:

“Tell me, Lord, if you please, by what right or title does a villein eat beef?… And goose, of which they have plenty? And this troubles God. God suffers from it and I too. For they are a sorry lot, these villeins who eat fat goose! Should they eat fish? Rather let them eat thistles and briars, thorns and straw and hay on Sunday and peapods on weekdays. They should keep watch without sleep and have trouble always; that is how villeins should live. Yet each day they are full and drunk on the best wines, and in fine clothes. The great expenditures of villeins comes at a high cost, for it is this that destroys and ruins the world. It is they who spoil the common welfare. From the villein comes all unhappiness. Should they eat meat? Rather they chew grass on the heath with the horned cattle and go naked on all fours.”

There they are. The 13th Century “welfare queens” buying smoked salmon with food stamps and sleeping through their job interviews. The rich hate the poor for presumed easy lifestyles cheating the system. Instead of working hard and advancing themselves, the modern “villeins” try to get-rich-quick, spending their money on alcohol and pipe dreams, killing one another rather than saving up for sensible living. It follows, says the modern liberal, that the poor get what they deserve while the bourgeois receive fair earnings.

With analyses like these, it’s no wonder that like the plebeians of Ancient Rome the peasants of Europe rose up in brutal, bloody class struggle in the 13th and 14th Centuries.

And if we fast forward to the 19th Century, we can find similar analyses of the proletariat made by the recently-established bourgeois aristocracy. The classic example is Guizot, the famous historian and economic minister of France’s Bourbon restoration and bourgeois monarch Louis-Philippe.

Guizot is mentioned by name in Communist Manifesto, as he was next to Metternich arguably the most detested man of the 19th Century. Yet his History of Civilization was broadly acclaimed by the bourgeois, because it was in fact a history of their class. The burghers emerged in the 13th Century to secure the peasant commons, Guizot states. Through private property, they provided a counter-power to the nobility and Church. In his Histoire, Guizot describes the ideal of the bourgeois: a strong, forceful man both independent and on guard to defend family and fortune from the nobles. A real “boot-strapper”:

“[T]he burghers of this period always had a coat of mail upon their breast, a pike in their hand; their life was as tempestuous, as warlike and as hardy as that of the lords with whom they fought. It was in these continual perils in struggling against all the difficulties of practical life, that they acquired that manly character and that obstinate energy which is, in a measure, lost in the soft activity of modern times.”

Genteel but strong and violent, the burghers won their property through force of arms, not effeminate daydreaming. They would continue to wage war in order to secure further fortunes and eventually overthrow their own masters. As for the “peuple,” Guizot’s classic motto was “Enrichissez vous!” “Get rich!” The aristocracy insisted, “we cannot hear you unless you speak with the money you’ve earned through bloodshed and war.”

When the workshop-socialist Louis Blanc attempted to host peasants’ banquets in rural areas to feed the famine-beset poor and organize a socialist base, Guizot shut them down. An outcry emerged throughout France leading to the tumultuous events of 1848. The chant rose up in Paris: “Down with Guizot!” Guizot indeed went down, but that did not stop the mob from going further, expelling Louis-Philippe, and re-establishing the Republic with Louis Blanc as the symbolic leader and radicals like Proudhon serving as deputies.

Unfortunately, it would appear that Clinton did not learn the lesson of Guizot—nor it seems has the European Central Bank. With slight quantitative adjustments, neoliberals have preserved the myth of poverty’s pathological self-sabotage as though a sacred relic plopped in the formaldehyde of racism and placed at the alter of austerity where it stands today for the unhappy plebs to worship or be damned.

The message of #nuitdebout today: To better the class position of the poor of all colors, shapes, and sizes, the cathedral of reaction must be torn to pieces, cobblestone by cobblestone, and our modern Guizots overthrown from their economic bully pulpits. The message of Black Lives Matter remains the same: We will not be able to unite as a truly democratic people until the rights of all people are realized through direct action. Where these two movements converge, hatred, fear, and jealousy are cast out like the monarchs of old, leaving open the space of praxis, ever-new but more ancient than history.

Alexander Reid Ross is a contributing moderator of the Earth First! Newswire. He is the editor of Grabbing Back: Essays Against the Global Land Grab (AK Press 2014) and a contributor to Life During Wartime (AK Press 2013). His most recent book Against the Fascist Creep is forthcoming through AK Press.