Washington’s withdrawal from the INF Treaty is just the latest move against Russia that will serve to intensify an arms race on the European continent that is already underway. It may also force Russia to take things to the next level.

Aside from the unprecedented stockpiling of weapons of mass destruction on an epic scale, a whirlwind of regional developments are now underway that foreshadow extremely unsettling consequences. First and foremost is this month’s formal announcement by the Trump administration that it would be pulling out of the Intermediate-Range Nuclear Forces Treaty (INF Treaty), signed into force by Mikhail Gorbachev and Ronald Reagan back in 1987.

With the INF consigned to the dustbin of history, the US and Russia are free to design and produce ballistic and cruise missiles within a 500-5,500 kilometer range (310-3,420 miles). Would any NATO country be so foolish as to host these American-made weapons on their territory, thereby opening itself up to a devastating first-strike attack in some worst-case scenario? Poland is one possible candidate. After all, Polish President Andrzej Duda last year offered the United States $2 billion in financing for the construction of a permanent American base on Poland’s eastern border. While the two NATO countries are still considering the idea, it is clear that the eradication of the INF Treaty promises to ratchet up tensions between Russia and its neighbors.

Washington’s pullout from the INF did not occur in a vacuum, of course. It followed in the tank tracks of George W. Bush’s disastrous decision to withdraw from the ABM Treaty, one of many opportunistic moves committed by the United States in the aftermath of 9/11. With the ABM out of the way, the United States was able to establish a missile defense shield in Romania, just miles from the Russian border. Washington’s overtures to Moscow that it would welcome Russian participation in the project were eventually revealed as a deceitful stalling tactic. Russian President Vladimir Putin was not fooled, however, and wasted no time researching and developing of a lethal array of new weapon systems, including a nuclear-powered cruise missile with unlimited range. 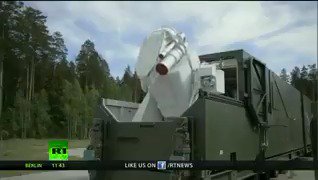 At this point in the updated ‘Great Game’ there is a temptation to say that the US and Russia have entered yet another ‘MAD’ moment, that is, ‘mutually assured destruction’ should one side or the other attempt fate with a first-strike attack. Check mate, as it were. After all, Russia has got its “unstoppable” nuclear-powered cruise missile and other fearsome hardware, while the US has its missile defense shield, as well as numerous NATO set pieces, bolted down in Europe. Everything is wonderful in the neighborhood, right? Well, not exactly.

Comparing the present standoff between the US and Russia to the Cold War realities is erroneous and dangerous for a number of reasons. First, the opportunity for some sort of mishap resulting in all-out war has never been greater. The reason is not simply due to the dizzying amount of firepower involved, but rather due to the proximity of the firepower to the Russian border.  During the Cold War standoff, Moscow, the nerve center of the Soviet empire, was well guarded by the buffer of Warsaw Pact republics. Today, that buffer has practically vanished, and NATO is not only encamped deep inside of Eastern Europe, but – in the case of the Baltic States of Estonia and Latvia – smack up against the Russian border. Although the entire concept of time, distance and space has been made somewhat redundant by the exceptional speed of modern missiles and aircraft, this has not reduced the possibility of NATO and Russia accidentally stumbling into a very bad situation.

Now with the INF Treaty out of the way there is the possibility that Washington will place intermediate-range missiles in Russia’s backyard. Such a move would flush with Washington’s revised nuclear doctrine, which not only aims for increasing its nuclear arsenal, but – in pure Dr. Strangelove fashion – lowering the threshold for which nuclear weapons may be used. To think that Russia will watch passively on the sidelines as the US disrupts the regional strategic balance in its favor would be wishful thinking.

Even as the corpse of the INF treaty was still warm, Mark T. Esper, the new US secretary of defense said he favored the deployment of new American ground-based missiles to Asia, without specifying a precise location.

“It’s fair to say, though, that we would like to deploy a capability sooner rather than later,” Esper said while en route to Australia for foreign policy meetings. “I would prefer months. I just don’t have the latest state of play on timelines.”

Meanwhile, the Pentagon is reportedly moving ahead with the development of missile systems, including a cruise missile with an expected 1,000 km range and an intermediate-range ballistic missile with a 3,000 to 4,000 km range. With the ‘shield’ of a US missile defense system already established in Eastern Europe, Russia will not sit by idly and wait for NATO’s other hand to pick up a sword.

What options are open to Russia at this point? Aside from its Russia-based defenses already mentioned, Moscow will feel very compelled to move its strike abilities closer to the United States in order to match NATO’s newfound capacity just over the Russian border.

Putin has emphasized that Russia will not deploy ballistic missiles unless the US does so first. If he were required to respond, would Russia consider a permanent missile base somewhere in Latin America, just miles from US shores, mirroring the same situation that Russia faces in Eastern Europe? Imagine a situation where ‘Trump’s Mexican Wall’ became in reality a host of Russian launch pads. Although ti would solve America’s migrant problem, it probably won’t do much to help Americans sleep better at night. Impossible to imagine, of course, yet that is the exact dire scenario Russia faces on its own border with the Baltic States.

A more likely scenario, however, is that Putin, in the event Trump ‘goes nuclear’ in Eastern Europe, will deploy round-the-clock stealth submarines armed with ballistic missiles near the American shoreline as an insurance policy. It is a dreadful new reality to consider, yet as the United States continues with its reckless treaty-trashing posture it is a reality the world will be forced to live with.