Got man boobs? It’s not the soy, it’s the BEER

(Natural News) If you listen to your medical doctor, who knows very little about nutrition, you may think those man boobs are genetic or caused by obesity, drugs (legal and illegal), or most likely soy, but you would be way off. What’s really affecting those hormones and influencing them so badly that thousands of men now have large, sagging breasts full of excess mammary tissue? Did you know breast reduction for men is one of the most popular forms of surgery in the USA? In fact, breast reduction operations for men are increasing by as much as 80 percent, according to Plastic Surgeons from Great Britain.

Sure, you’ve heard the myth, over and over, that soy’s estrogen-promoting effects are a major cause of man boobs, but did you ever bother to check the facts, the science on that? Surprise, surprise: It’s not the soy, but all that manly beer that’s growing those man boobs at an alarming rate. Wake up and smell the alpha-estrogen.

So, what are the REAL estrogenic effects of soy, and why is that the popular narrative – that soy causes man boobs? Well, that one is easy. The meat industry doesn’t want a hundred million American men all of the sudden dropping meat and choosing healthy, organic soy. It’s all a money-making scheme to deter anyone from learning the truth about their health and well-being.

The soy myth dismantled and unraveled

Do you chow down 500 pounds of soy burgers daily? Do you consume 500 pounds of tofu daily? Wait, are you one of those people who drinks 500 cartons of soy milk every day? Well then, it’s not the soy causing those “sheep” boobs. Yes, Google lies. You’re reading myths and fairy tales.

Looking to balance male hormone levels, by choosing the right foods and eliminating the bad ones? The science tells you to choose a plant-based diet and avoid beer. The most potent phytoestrogen in the WORLD, it turns out, is in beer. According to German scientists, that’s why female hop pickers begin menstruating when they begin touching hops.

Turns out, the phytoestrogens in beer attach to the alpha-estrogen receptors (as opposed to beta receptors), and that increases risk of breast cancer. That’s the reason hop extracts are used in breast enhancement supplements. Wow. Here comes the big whammy, so to speak. Soy phytoestrogens attach to beta receptors, serving a breast cancer reducing effect. Bottom line: If you’re worrying about testosterone and ever-growing “man boobs,” you best drop the brew, and then your man-cave friends might stop telling you that you need to buy a bra.

Turn to a plant-based diet and don’t look back, even when the meat, dairy, and BEER industries scream for your money

Remember, doctors in America used to say that smoking was good for digestion and made you manly. Then all the Marlboro Men starting all dying from lung cancer. Choose organic soy as a meat replacement and drop the booze. Don’t let the “busty myth” about soy ruin your smart health choices, for cancer prevention and longevity.

Men’s hormones are way out of whack in America, where most men are stuck in their rut with the Standard American Diet of meat, milk, cheese, bread, and beer. There are artificial hormones in all conventional meat and dairy from the CAFO animals being injected for growth and production profits. You are what you eat and drink. There are also chemicals in plastics (think BPA) and toxins in pesticides (think Atrazine) that disturb male hormones and cause severe imbalances. All these “Low-T” meds you see advertised on TV are cancer nightmares waiting to worsen.

The cost of eating organic is much cheaper than conventional, because there’s no breast cancer surgery and chemotherapy on your horizon. You asked for the truth and you got it. Scientific truth. Nutritional truth. Remember, knowledge is power. And now we know exactly which foods and beverages adversely affect male hormone levels the most – conventional meat and beer.

Now learn more about what the science reveals in this 3rd installment of the Men’s Health Series with Dr. Michael Greger of Nutritionfacts.org.

And, if you would like extended science and nutrition explanations, check out Dr. Gemma Newman as she delves into the true causes of diabetes, and the best lifestyle changes that literally REVERSE these killers the M.D.s say you can’t cure.

Tune in to NaturalHealth.news for more insights into how mainstream media attacks the most intelligent health advice, and then you’ll know the difference.

(Natural News) Men beware: taking ibuprofen daily can negatively impact your fertility. To be more precise: taking this pain reliever in doses utilized by athletes can lead to sexual hormone dysfunction. This is what a team of Danish and French investigators uncovered in their study. This new research is built on the team’s earlier work, wherein they found that over-the-counter pain relievers could affect the testicles of male babies. From here, they decided to analyze what ibuprofen could do to adults.

For the purposes of their study, the team recruited 31 men who were between 18 and 35 years of age. Of the volunteers, 14 were given 600 milligram doses of ibuprofen twice a day, while the rest were administered a placebo. The doses that the 14 participants received is both the maximum dose prescribed by most ibuprofen packages and what many athletes take as a preventive measure.

After just 14 days or a third of the way into the study, the men who were being given ibuprofen had developed hormonal imbalances. Taking the drug increased their levels of luteinizing hormones, which are hormones released in the anterior pituitary gland that control the function of the ovaries and testes. At the same time, their overall testosterone dropped. Though their testosterone levels remained the same, the researchers noticed that their testosterone production took a significant dip, resulting in them getting compensated hypogonadism.

According to DailyMail.co.uk, this condition is considered to be a precursor to “overt primary hypogonadism” or low testosterone levels. Normally seen in smokers and older men, this disorder, wrote the researchers, “is characterized by low circulating testosterone and prevalent symptoms including reduced libido, reduced muscle mass and strength, and depressed mood and fatigue.” (Related: BPA exposure causes erectile dysfunction and other male sexual problems.)

Luckily for the volunteers, these were just short-term effects, and the authors stated that the participants’ hormone levels would return to normal at the end of the experiment. They warned, however, that long-term users of ibuprofen wouldn’t be as fortunate, although those who took ibuprofen on occasion wouldn’t be as at high of a risk.

Speaking to TheGuardian.com, study author David Møbjerg Kristensen remarked that long-term users were the subjects of their concern, such as athletes and those undergoing pain management. “Our immediate concern is for the fertility of men who use these drugs for a long time. These compounds are good painkillers, but a certain amount of people in society use them without thinking of them as proper medicines,” he said.

Kristensen’s co-author Bernard Jégou echoed his sentiments, commenting: “We normally see this condition in elderly men, so it raises an alarm. We are concerned about it, particularly for healthy people who don’t need to take these drugs. The risk is greater than the benefit.”

Find out what other medicines can do to your body by visiting BigPharmaNews.com today.

Why Are Men Becoming so Effeminate? (Are you a Soy Boy?) 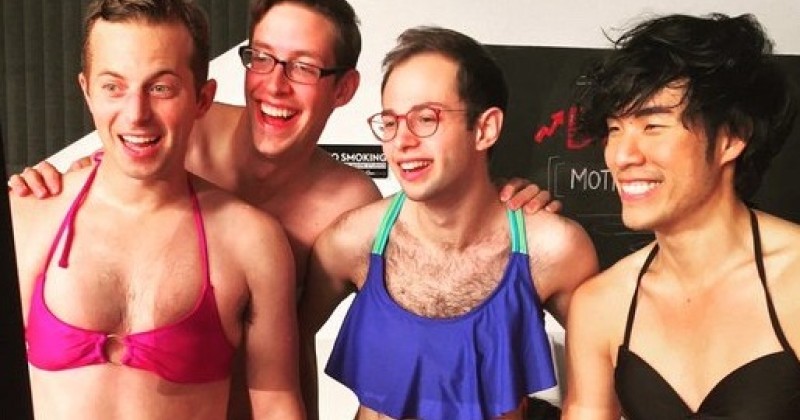 Why are straight men becoming so effeminate?Men’s testosterone levels in the west have been dropping EVERY YEAR since the 80’s.Estrogen in food and the water supply as a result of birth control & other contaminants is reaching crisis levels.

What is going on? Is it mainly cultural or environmental?

How can we reverse the loss of an entire generation?

Paul Joseph Watson is the editor at large of Infowars.com and Prison Planet.com.

Natural News readers are well aware of the toxic products being sold to the uniformed public and hopefully are doing a good job avoiding them for their own personal care products.  This new study conducted on 100 Teens at UC Berkeley may help us convince others to pay attention.

The results, published today in the journal Environmental Health Perspectives, came from a study of 100 Latina teenagers participating in the Health and Environmental Research on Makeup of Salinas Adolescents (HERMOSA) study.

Teen girls use more personal care products than adult woman and need to be especially aware of the hormone-disrupting chemicals in the products they use.

Chemical presence decreased by as much as 45 percent

Analysis of urine samples before and after a three-day trial in which the participants used the lower- chemical products found significant drops in levels of these chemicals in the body. Metabolites of diethyl phthalate, commonly used in fragrances, decreased 27 percent by the end of the trial period. Methyl and propyl parabens, used as preservatives in cosmetics, dropped 44 and 45 percent respectively. Both triclosan, found in antibacterial soaps and some brands of toothpaste, and benzophenone-3 (BP-3), found in some sunscreens under the name oxybenzone, fell 36 percent.

This study helped involve local high school students to help raise their awareness, learn more about the scientific method and encourage them to be more concerned about the environment and it’s impact on their own health.

The teen study shows 45% drop in chemicals was carried out by CHAMACOS Youth Council and included 12 local high school students who helped design and carry out the study. One teen researcher, Salinas native and study co-author Maritza Cárdenas, is now a UC Berkeley undergraduate majoring in molecular and cell biology.

“One of the goals of our study was to create awareness among the participants of the chemicals found in everyday products, to help make people more conscious about what they’re using,” said Cárdenas. “Seeing the drop in chemical levels after just three days shows that simple actions can be taken, such as choosing products with fewer chemicals, and make a difference.”

Part of this study was funded by the California Breast Cancer Research Program of the University of California.