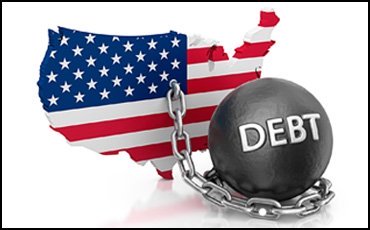 Below are an interview I gave to the Herland Report prior to the coronavirus explaining our precarious economic situation and Michael Hudson’s article today explaining that the way out of the economic crisis is a debt jubilee.  As the debts cannot be paid, it makes far more sense to forgive them than for all of us to sink with them. Debt cancellation is not an expression of idealistic egalitarianism. It is a practical alternative to prolonged depression and worse economic polarization with all of its social and political implications.

The central point of my interview is that deregulation and concentration of the economy and its financialization has made another severe depression unavoidable—unless possibly there is a debt jubilee as Michael Hudson recommends.  See this.

The question we face is whether our leadership can understand that more debt is not the answer.  So far “solutions” seem to be to make more loans, thereby continuing to build up debt. As existing debts—mortgage, student, car, credit card—are so overwhelming that they cannot be paid, adding more loans is like throwing fuel on a fire.

Debts have to be cancelled as they are smothering individuals, businesses, and the economy. Our economic culture is accustomed to thinking that debt must be paid. The belief is that to reward those who did not live frugally and avoid debt subsidizes and encourages bad behavior. But in this case, unless debts are forgiven the frugal and responsible go down with everyone else.  As I have emphasized for 20 or more years, globalism stopped real family income growth by offshoring high-value added jobs.  Under Alan Greenspan, the Federal Reserve used debt expansion to take the place of income growth in order to continue to fuel aggregate consumer demand.

Debt forgiveness has a long history of success.  The ancients used it repeatedly, and in 1948 in Germany, the replacement of the Reichsmark with the Deutsche mark wiped out 90 percent of government and private debt, resulting in “the German miracle.”

Government debt is not the problem that private debt is.  Government can pay off its debt by printing money, but individuals and businesses cannot.  As Hudson says,

“if the U.S. government can finance $4.5 trillion in quantitative easing for the banks, it can absorb the cost of forgoing student and other debt. And for private lenders, only bad loans need be wiped out. Much of what would be written off are accruals, late charges and penalties on loans gone bad.”

Our ingrained ways of thinking can easily prevent a solution to the current crisis, which is building as I write.

Here is a link to Hudson’s article.

Note to readers: please click the share buttons above or below. Forward this article to your email lists. Crosspost on your blog site, internet forums. etc.

Dr. Paul Craig Roberts writes on his blog, PCR Institute for Political Economy, where this article was originally published. He is a frequent contributor to Global Research.