The Rising Cost of Living Is Becoming a Humanitarian Crisis

Posted by Lou on May 9, 2018
Posted in: Cost of living, Economics, Housing, Poverty, Wealth inequality. Leave a comment 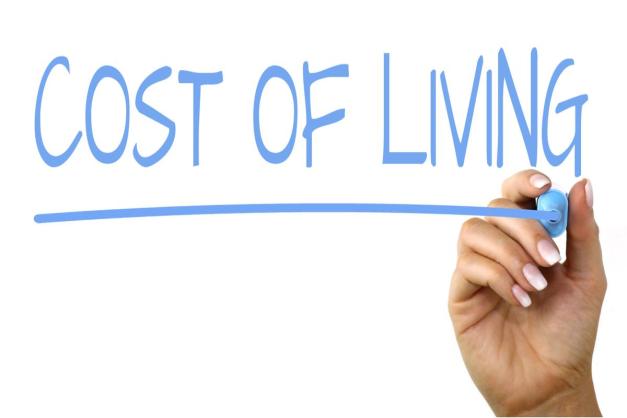 According to experts, housing should only make up 28% of your total monthly household expenses. However, in many areas of the America today, housing costs up to 40% or more of the average worker’s take-home pay.

When you factor in all the other expenses people have just to survive – car insurance, health insurance, utilities, phone bills, food – suddenly, you have a whole lot of people with a whole lot of month left over once their budget runs out. And this ever-rising cost-of-living coupled with stagnant wages is quickly creating a humanitarian crisis not just in America, but globally.

A Tale of Two Cities

Two of the cities where rent prices have risen the fastest are Denver, CO and Seattle, WA. With the arrival of legal marijuana, patients from across the nation flocked to the Denver metro area in hopes of finding a cure, or at least a treatment that worked. The booming tech industry likewise brought a housing boom to the Seattle area.

In Denver, in order for a single adult with one child to live comfortably, that wage earner must earn an average of $28.08 per hour. The vast majority of jobs; however, start at an average wage of under $15 per hour.

Likewise, in Seattle, while the average wage is over $70,000 given the high-tech nature of the economy, the average rent now costs over $2,400. So even though, on average, people are earning higher wages, they simply are not enough to keep up with the skyrocketing costs of housing in the area.

If rents and housing costs were all that were skyrocketing while wages stagnate, people might be able to find a way to make it work, even given the way rent has skyrocketed. But it’s not just housing prices rising precipitously that has put many in an economic pinch. The costs of fuel, healthcare, food and needed medications are also on the rise.

This is true not just in the United States, but globally as well. Prices in Australia, for example, have far outstripped the cost-of-living increases those reliant on social services depend upon to make ends meet, hitting pensioners and the disabled particularly hard. Even in Australia, where those reliant on services received a 1% increase, prices continue to climb by 2.4%, leaving people further and further behind economically and forcing them to make tough choices between food and other necessities of living.

Rising fuel prices really put the economic pinch on people, particularly those who face long commutes to work daily. On average in the United States, gasoline prices have risen 34% since this same time last year. This translates into commuters paying hundreds, if not thousands, more annually to get to the same job where, given the cost-of-living increases, workers actually earn less than they have in the past.

Sadly, for Americans, there is little hope for relief in sight under the current administration. By passing sweeping tax cuts for the wealthiest Americans, the Trump administration and Republicans in Congress have now turned their gaze toward continuing to slash Social Security, Medicare and Medicaid. And in the midst of the current housing process, HUD Secretary Ben Carson just last week proposed changing the rules for those who receive rent vouchers, effectively tripling the rent of the poorest and most vulnerable Americans.

The rising cost-of-living coupled with stagnant wages have thrown families around the globe into economic crisis. Parents are being forced to choose between life-giving food and medicine for their children and paying rent. And nearly half of all Americans do not have even a spare $400 in savings to cover an unexpected emergency such as a car repair or doctor’s bill.

In these difficult economic times, it is imperative for nations to act to protect their most vulnerable. We must act not only at a national level, but at a global one. Until wages are brought back in line with rising prices, millions will continue to suffer and even die. To stop this crisis from growing worse, action on raising the minimum wage and ensuring a decent standard of life for all citizens must be taken swiftly.