Not much detective work is needed to look at the USA as the probable culprit. This is an act of war from the most powerful nation on the planet. Attacking a small country for its oil is despicable. 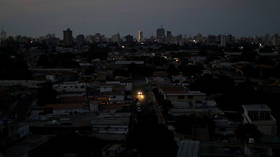 Much of Venezuela is suffering from a massive blackout, social media users and local news outlets have reported. Power shortages, which began on Monday morning, have impacted at least 18 states, including the capital, Caracas.

The lack of electricity has caused chaos for the transportation network in the capital and has disrupted phone and internet connections.

In March, Venezuela suffered two major blackouts that send the country into darkness for days. The government of President Nicolas Maduro blamed the US-led local opposition of sabotaging the power grid, amid Washington’s attempts to topple the elected president.

Manifesto of the Awakened

If you do not cease and desist, you too will shrivel up in the dustbin of history as just another invasive parasite that couldn’t succeed in its self-serving designs.

From and with permission of

To the Few Whom This Concerns:

Re: The deliberate subjugation of our people and planet

While you continue to hypocritically blame humanity for the dire plight of our world, we hereby put you on notice that we are well aware that it is you, the financial, corporate, military, scientific and governmental agents and most of all the dark shadow forces behind you that we know full well comprise and empower the destructive global power grid that is responsible for our current engineered crises and overall social condition.

You’ve brought us and our planet to the precipice. If you do not cease and desist, what is soon to come will be blood on your hands, cause untold suffering, and all for naught as far as your designs are concerned. You too will shrivel up in the dustbin of history as just another invasive parasite that couldn’t succeed in its self-serving designs for all its efforts.

We hereby officially notify all those complicit in this massive control program that:

This will be tolerated no longer.

If there is an ounce of humanity left in any of you, defect and help us expose and bring down these life ending forces. You, your children, your grandchildren and anything you may still hold dear are already suffering and will also perish in the catastrophe we are soon destined for if you do not respond.

We are aware. We are awake and activated. We will do everything within and without our personal power to see our race and planet survive and shake this parasitic invasion. Our planet itself will not take this attempted overthrow. Know that, and expect repercussions from Her, as well as us, a gathering storm of sacred truth you cannot possibly fathom.

Your opposition, resistance and puny, short-sighted efforts are dwarfed by what awaits you.

Will you find your humanity in time? We think many of you could, and those of you who do will be welcomed amongst the awakened. However, we realize many are beyond redemption.

But don’t try to fool us. We’re more on to you than you could ever imagine.

Just watch and see. We will surprise you, just as you fear.

We’re here. We live. We cannot be stopped nor thwarted by any means despite your flimsy efforts.

The Truth and Love we bear are coming for you. Truth and cosmic resonance cannot be denied and any aberration from it will be mitigated.

That’s just the way it is.

Think about it. If you dare.

Songs for the Revolution: Paint it Black, The Vietnam War Way