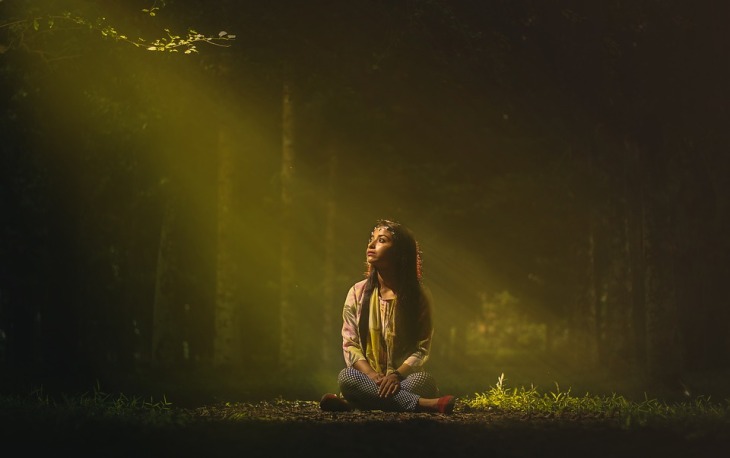 It’s a commonly known fact that the act of gardening can reduce stress and improve moods, but recent scientific studies have now shown that a particular microorganism that is found in soil can improve wellbeing and even act as an antidepressant. Mycobacterium vaccae is commonly found in soil, and has been proven to activate the release of brain serotonin, according to reports. The chemical serotonin together with dopamine boost immune systems and keep people happy. Both of these chemicals are neurotransmitters, which act as chemical messengers in the brain. dopamine affects emotions, movements and sensations of pleasure and pain, whilst serotonin regulates mood, social behaviour, libido, sleep, memory, and learning. When a person is gardening, M. vaccae is present on the skin when bare hands are in the soil. This is then either inhaled or enters into the bloodstream through any cuts.

The positive effects of the soil bacteria were discovered by accident by oncologist Dr Mary O’Brien, after she created a serum from the bacteria and gave it to lung cancer patients in an attempt to boost their immune system. Following this, she noticed the additional effects that the bacteria was having on the patients, which included enhanced happiness as well as them suffering less pain. Building on this concept, researchers Dorothy Matthews and Susan Jenks administered M. vaccae to mice before performing behavioural tests. Jenks said, “What our research suggests is that eating, touching and breathing a soil organism may be tied to the development of our immune system and nervous system.” Their tests also showed that the mice were less anxious. Matthews stated, “It is interesting to speculate that creating learning environments in schools that include time in the outdoors where M. vaccae is present may decrease anxiety and improve the ability to learn new tasks.” 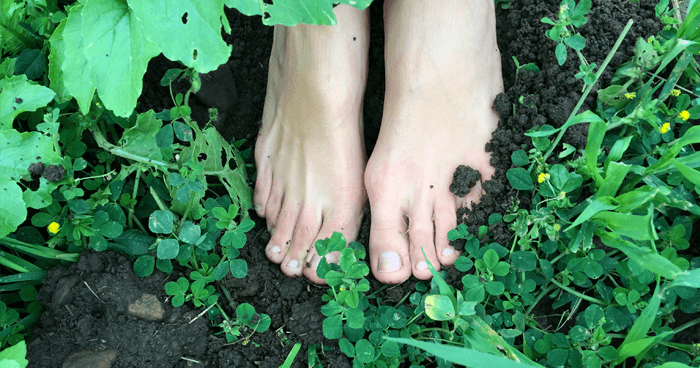 Studies claim that the overall wellbeing of a person’s immune system and psychology is enhanced by frequent exposure to a diverse group of bacteria, fungi, protozoa, and worms during the period of early childhood. The gastro-intestinal ract develops a hundred trillion microbes over a period of time, which is determined by a combination of genetics and the particular bacteria that live in and on living things around an individual. Therefore, scientists have stated that a diverse range of organisms, found in animals, plants, soil, water and air, are all required for the optimal functioning of the immune and nervous systems.

By simply spending time in nature, whether that be looking at plants and trees or physically gardening, the mental, social and physical wellbeing is impacted. Researchers, including Roger S. Ulrich, PhD, have found that viewing nature can help the body to heal. Ulrich found that patients whose rooms overlooked trees recovered better than those who had the view of a brick wall. They also got out of hospital faster, required less pain medication and had fewer complications. Being in nature, and particularly gardening, can be quite a creative activity, and permaculturist Robyn Francis has discovered that the act releases dopamine in the brain when products are harvested from the garden. She claimed, “Researchers hypothesise that this response evolved over nearly 200,000 years of hunter gathering, that when food was found (gathered or hunted) a flush of dopamine released in the reward centre of the brain triggered a state of bliss or mild euphoria. The dopamine release can be triggered by sight (seeing a fruit or berry) and smell as well as by the action of actually plucking the fruit.” 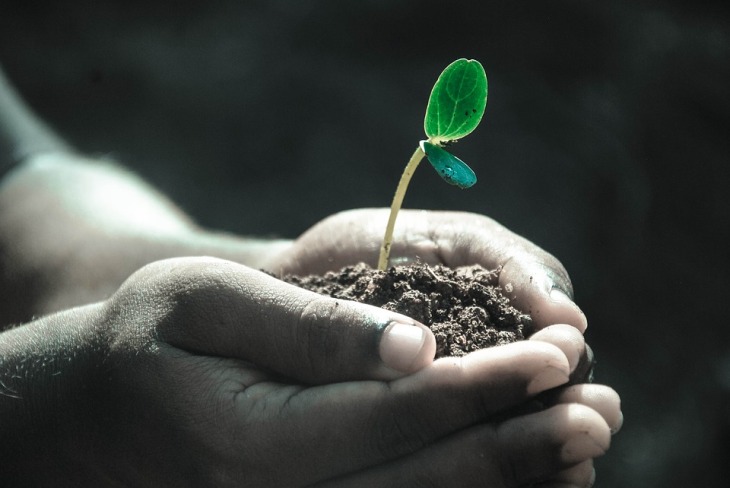 Dr Daphne Miller has also written extensively on soil health and the health of the people who eat from that soil, and explained, “Perhaps the best place for us each to begin is with our own backyard plot or window box. Planting a rainbow of seeds, avoiding garden chemicals, nourishing the soil with plant matter, digging with our hands and eating the bounty – while not guaranteed to replace a pharmaceutical grade antidepressant – is a wonderful chance to hang out with ‘Old Friends’.” 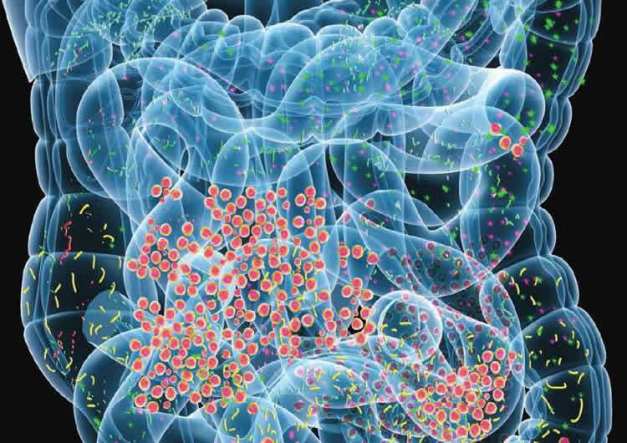 NeuroscienceNews.com image is for illustrative purposes only

Neuroscience News
December 7, 2016
Summary: Researchers confirm the link between mood, mental health and gut bacteria.Source: ACNP.All of us who have experienced a “nervous stomach” under periods of stress suspect that there is a link between our gut and our mood. This link received strong scientific support during a series of presentations at the recent meeting of the American College of Neuropsychopharmacology.

As noted by Dr. Vicki Ellingrod – the Chair of this session, “Current state-of-the-art research in both animal models as well as humans point to the link between the gut microbiota and mood and anxiety models, as well as the potential for psychiatric medications to directly affect the gut microbiome.”

This link was most convincingly demonstrated when changes in the diversity of microorganisms living in the gastrointestinal system were measured while rats were subjected to chronic stress over a 7-week period. Not only did the number of microorganisms decrease as stress became more chronic, behavioral changes suggested that the rats also began experiencing loss of pleasure and “despair-like” behavior. Moreover, when these microorganisms were transferred from the stressed rats to a new group of animals that had not been stressed, Dr. Emily Jutkiewicz found that these new animals also began to demonstrate these same behavioral changes after 5 days, suggesting a potential causal mechanism.

Treatment implications were examined in a series of human studies that demonstrated similar reductions in the microbiome in participants suffering from both major depression and bipolar disorder. These changes were associated with increased anxiety and sleep problems, and with increased complaints of general health problems. Referring to these associations in bipolar subjects, Dr. Simon Evans concluded that, “The data support the hypothesis that targeting the microbiome may be an effective treatment paradigm for bipolar disorder.”

“Current state-of-the-art research in both animal models as well as humans point to the link between the gut microbiota and mood and anxiety models, as well as the potential for psychiatric medications to directly affect the gut microbiome.”

The role of medications was examined during the final two presentations. By studying individuals over time, Dr. Chadi Calarge was able to examine microbiome changes when individuals were depressed or in remission, and when they were and were not receiving anti-depressant medications (SSRIs). While no changes in gut bacterial diversity was seen in patients with depression, species-level differences were observed. In addition, starting SSRI treatment was associated with increased Indoles production, implicating changes in tryptophanase-producing bacteria. In addition, preliminary evidence suggests the presence of increased intestinal permeability in depression, potentially leading to increased bacterial translocation.

Finally, changes in how our body metabolizes energy, and resulting weight gain can be a troubling side effect of atypical antipsychotic (AAP) medications. In the final presentation of the day, Dr. Stephanie Flowers showed that female bipolar participants who gained weight with AAP treatment, had a greater reduction in microbiome diversity than did female bipolar patients who were also being treated with AAP medications but did not gain weight, suggesting that the health of our gut may also put us at increased risk for certain medication side effects.

About this psychology research article

Source: Erin Colladay – ACNP
Image Source: NeuroscienceNews.com image is for illustrative purposes only.
Original Research: The study will be presented at the 55th Annual Meeting of the American College of Neuropsychopharmacology.

Scientists say physical contact between chimps increases the diversity of bacteria in their guts. 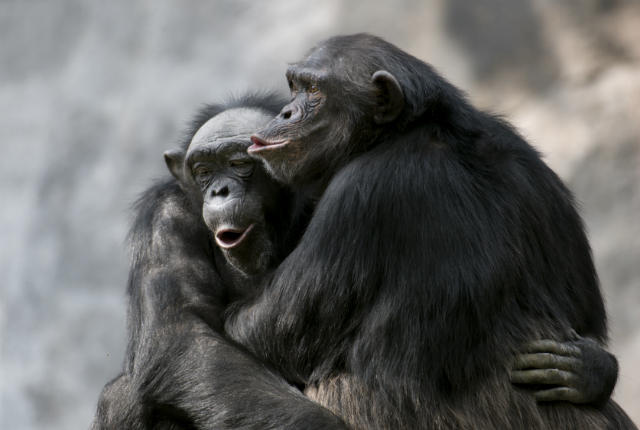 Everybody loves a good story about animals being friends. But there’s often a lot more to those heartwarming images than any of us would suspect. That’s certainly the case with chimpanzee buddies. In a paper published today in Science Advances, researchers say that friendly chimpanzees have healthier microbiomes.

The term “microbiome” refers to the microscopic ecosystem of bacteria, fungi, and archaea that live on your skin and in your mouth and gastrointestinal tract. Like any ecosystem, a microbiome is healthiest when it contains a wide range of species. Studies have shown that low microbial diversity is linked to a number of medical conditions. “The more diverse people’s microbiomes are, the more resistant they seem to be to opportunistic infections,” co-author Andrew Moeller said in a press release.

The contents of your microbiome come from a wide variety of sources, including your family, your diet, and the world around you. For social animals like humans and chimpanzees, that world includes a lot of contact with others.

Moeller and his colleagues wondered just how much of an effect socializing could have on the microbiome. To find out, they spent eight years studying wild chimpanzees in Tanzania’s Gombe National Park, collecting chimpanzee poop. The researchers followed 40 individuals, ranging in age from babies to seniors, picking up what the apes left behind while noting what the animals ate and how much time they spent with others.

The scientists then brought the chimpanzee poop back to the lab and sequenced the DNA of all the bacteria inside. They found that the chimps’ microbiomes were about 20 to 25 percent more diverse during the rainy season, a time when bugs, fruit, and leaves are in abundance.

But it wasn’t just the food that was causing those changes. The researchers noted that the chimps spent a lot more time together during the rainy season, mating and grooming one another. And where there were a lot of chimpanzees in close proximity, the odds of one individual accidentally stepping in another’s poop was increased. In short, there was a whole lot of bacterial transmission going on. The friendlier the chimp, the more diverse its gut bacteria.

The study results also showed that the specific bacteria species found in chimpanzee guts were just as likely to be similar between friends as they were between mothers and babies, a fact that suggests that social interactions are far more important than initially believed.

The microbiomes and chimpanzee friendships are especially interesting to scientists because they may offer clues to the evolution of human interactions.

“One of the main reasons that we started studying the microbiomes of chimpanzees was that it allowed us to do studies that have not or cannot be done in humans,” study co-author Howard Ochman said in the press release. “It’s really an amazing and previously underexploited resource.”

More research is needed to find out whether and how the diversity of gut bacteria affects chimpanzee health, and how the findings of this study might translate for humans.