I Am Not Anti-West

I am so pro-west that I want the west to embody the actual western values it pretends to embody. I am so pro-west that I support the practice of spreading western values to the west. I’m a western cultural imperialist, except I want to do western cultural imperialism to the west. I’m like a conquistador, a western colonialist setting sail to spread the wonders of western civilization to these godless western savages. Except, instead of actually just bringing them murder, slavery, theft and disease I really am trying to bring them western civilization.

I am so pro-west that I want the western values that were sold to me as a child to be actual things that actually exist. And because I support western values much more than the actual west does, I get called “anti-west” and told to move to China. Shit, THEY should move to China.

A guy I follow on Twitter named David Gondek put it very nicely: “There is nothing wrong with western civilization that living up to its own professed principles wouldn’t fix.”

It’s not “anti-west” to want the west to end warmongering, militarism, censorship, propaganda, government secrecy, oligarchy, injustice, oppression and exploitation, it is PRO-west. The “western values” of peace, justice, equality, democracy, freedom and accountability that we were taught in school are very good things. The only problem is that the west doesn’t actually value them.

The Bamiyan Buddhas were destroyed by an intolerant sect pretending to follow Islam. Buddhism all across Asia grieved. The West hardly paid attention.

The remaining ruins of Babylon, and the attached museum, were occupied, plundered and vandalized by a US Marine base during Shock and Awe in 2003. The West paid no attention.

Vast tracts of Palmyra – a legendary Silk Road oasis – were destroyed by another intolerant sect pretending to follow Islam with their backs covered by layers of Western “intelligence”. The West paid no attention.

Scores of Catholic and Orthodox churches in Syria were burnt to the ground by the same intolerant sect pretending to follow Islam with their backs sponsored and weaponized, among others, by the US, Britain, and France. The West paid no attention whatsoever.

Notre-Dame, which in many ways can be construed as the Matrix of the West, is partially consumed by a theoretically blind fire. 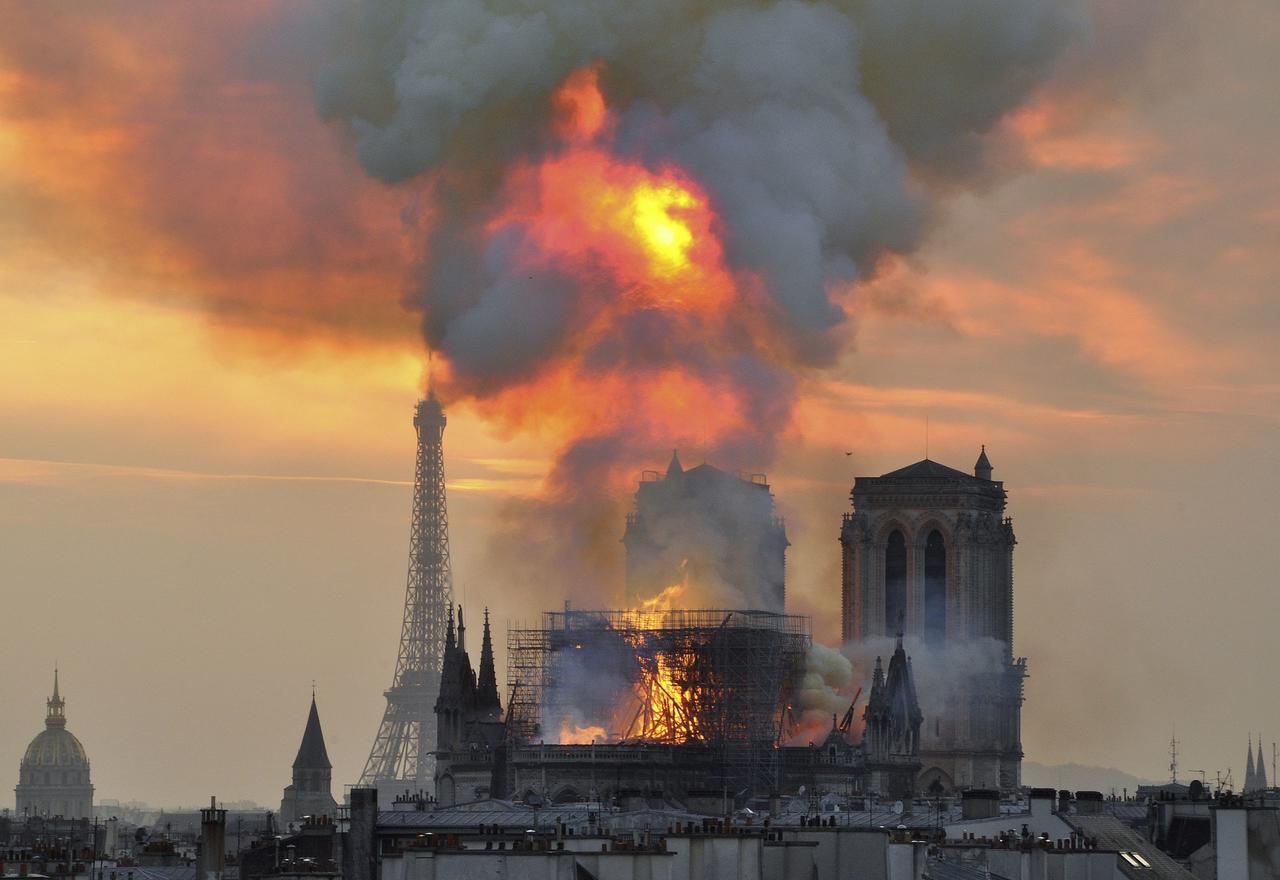 Especially the roof; hundreds of oak beams, some dating back to the 13th century. Metaphorically, this could be interpreted as the burning of the roof over the West’s collective heads.

Now back to the nitty-gritty.

Notre-Dame belongs to the French state, which had been paying little to no attention to a gothic jewel that traversed eight centuries.

Fragments of arcades, chimeras, reliefs, gargoyles were always falling to the ground and kept in an improvised deposit in the back of the cathedral.

Only last year Notre-Dame got a check for 2 million euros to restore the spire – which burned to the ground yesterday.

To restore the whole cathedral would have cost 150 million euros, according to the top world expert on Notre-Dame, who happens to be an American, Andrew Tallon.

Recently, the custodians of the cathedral and the French state were actually at war.

The French state was making at least 4 million euros a year, charging tourists to enter the Twin (Bell) Towers but putting back only 2 million euros for the maintenance of Notre-Dame.

The rector of Notre-Dame refused to charge for a ticket to enter the cathedral – as it happens, for example, at the Duomo in Milan.

Notre-Dame basically survives on donations – which pay the salaries of only 70 employees who need not only to supervise the masses of tourists but also to organize eight masses a day.

The French state’s proposal to minimize the ordeal; organize a beneficent lottery. That is; privatize what is a state commitment and obligation.

So yes: Sarkozy and Macron, their whole administrations, are directly and indirectly responsible for the fire.

Now comes the Notre-Dame of Billionaires.

So why not privatize this damn fine piece of real estate – disaster capitalism-style? Welcome to Notre-Dame luxury condo, hotel, and attached mall.

The Curse of 666 Fifth Avenue, the Skyscraper That Could Sink the Kushners

The Curse of 666 Fifth Avenue, the Skyscraper That Could Sink the Kushners

In one of the most reckless deals ever, the family bought a loser. To save it, Jared commissioned a giant phallus—and toed the line with shady financiers.

Whatever his other flaws as a human being, Jared Kushner is surely afflicted with Skyscraper Envy.

Like his father-in-law the president, Kushner wants his own tower—as big as it can possibly be.

The story of that tower, 666 Fifth Ave., hangs over the fate of the Kushner real estate empire like a curse. It is also part of a great and continuing American saga of how the modern skyline of cities is shaped by a handful of men of genius and others who, in contrast, just see the skyscraper as a way to fill the sky with a money machine.

In the early 1950s Midtown Manhattan seemed ripe for a new boom in high-rise real estate, picking up again from the decade before World War II when three iconic architectural achievements had given New York the most dynamic urban skyline in the world: in 1930 the Chrysler Building with its spiked tip looking like a Buck Rogers rocket; in 1931, the world’s tallest building, the Empire State Building; and the massive Rockefeller Center between Sixth and Fifth Avenues, a multi-tower complex completed in 1939.

Rockefeller Center had, thanks to the largesse of the Rockefeller family, been built to lift American spirits as a counter-punch to the ravages of the Great Depression. Now, after the war, with many European cities in ruins, many of the architects who bore in their minds a dream of what the metropolis of the future should look like, were drawn to America.

None was more visionary or more regarded as a founding hand in shaping the city of the future—or, as it was often described, the city of the Machine Age—than Mies van der Rohe.

Mies (as he was always known) was one of a cadre of architects who fled Nazi Germany when their progressive ideas nurtured at the legendary Bauhaus design school were, like all modern art, dismissed as decadent.

When he came to America Mies went not to New York but to the city where Louis Sullivan gave birth to the skyscraper in the 1890s, the city regarded as the most creatively sympathetic host to modernism in the world: Chicago. In his first buildings there, two 26-story apartment towers, Mies instantly became to modern architecture what Steve Jobs became later to the cellphone: He stripped the form down to the pure essentials of function and, in doing so, created a singular, austere beauty.

The technique he used, in which the glass is hung on a steel frame, known as a curtain wall, had been used in the late 1940s by the Brazilian architect Oscar Niemeyer for the United Nations building on New York’s East River, but Mies had suggested it much earlier in sketches made at the Bauhuas and in Chicago he refined it with a finesse that was mimicked in many future towers, but rarely as well.

However, it was in New York where Mies would produce his masterwork. The Canadian Bronfman family, owners of the Seagram distillers corporation, chose a site on Park Avenue between 52nd Street and 53rd streets for a new headquarters and Mies, working directly with Phyllis Lambert, the daughter of the Seagram CEO, Samuel Bronfman, produced what was, at $41 million, the world’s most expensive skyscraper at the time, the 38-story Seagram Building.

When I first saw it, soon after its completion, I was gobsmacked. A cold winter light invested the bronze exterior with a kind of warm inner glow. There were far fewer towers in Midtown Manhattan then and the Seagram Building, seeming modest in height now, stood out with its perfect scale, like a celebratory steele staking out its ground to prove the peculiar beauty of steel and glass in a way that had not been achieved before.

At the same time, virtually across the street on Park Avenue, between 53rd and 54th streets, a Buffalo-born American architect, Gordon Bunshaft, a fan of the Bauhaus, had seized the chance to build his own version of the same austere modernism, again with an enlightened sponsor, the president of the British-based soap empire, Lever Brothers. Lever House combined a 21-story curtain-walled tower (the glass was green-tinted) with a single story block-long base that enclosed a piazza. Like the Seagram Building, it was an instant classic of modernism.

Mies and Bunshaft had both done something that was anathema to developers who wanted to squeeze every dollar out of a site. Their towers took up less than half the air space that could have been used according to the zoning laws—in order to create impeccably proportioned skyscrapers that were set back from the street line and, at the same time, airy public spaces at street level (the Seagram Building’s plaza and fountains appear in the movie that, more than any other, romances Midtown Manhattan of the period, Breakfast at Tiffanys.)