Depression: Another side effect of toxic vaccinations?

Source: Depression: Another side effect of toxic vaccinations? – NaturalNews.com

(Natural News) If it seems like a lot of people you know are suffering from depression, it’s probably not your imagination: The World Health Organization reports that roughly 300 million people around the world are dealing with the disorder, and other studies show that 16.2 million American adults experienced a major depressive episode at least once during the past year.

It’s a serious problem that can have a very negative impact on your quality of life. It is characterized by at least two weeks of depressed mood and a loss of interest in activities, along with symptoms like sleeping problems, appetite or weight changes, lower energy, difficulty with concentration, slow physical movements, or thoughts of or attempts at suicide.

Depression is also increasingly affecting children, with statistics showing that up to three percent of kids aged six to 12, and eight percent of teenagers could be suffering from serious depression. Why is depression suddenly becoming such a big problem?

Psychiatrist Kelly Brogan thinks vaccines could be contributing to depression in a surprising way. Her research points to the possibility that an aluminum adjuvant used in more than 18 common childhood vaccines is causing the long-term brain inflammation linked to depression, with Gardasil being one of the biggest culprits.

Dr. Brogan cites several other studies that support this connection. One study, which looked at 41 undergraduate students, found that nearly every subject who had been given the flu jab had a rise in blood levels of the anti-inflammatory myokine IL-6, and those with the largest rises had become more depressed and confused.

She’s hardly the only person who thinks this way; another study has found that the rise in vaccines injected into infants whose immune systems and central nervous systems are still developing is also playing a role. According to the Giannotta paper, several vaccines can be linked to neuroinflammation, and in turn, depression.

It’s not surprising, then, that a study published in Frontiers in Psychiatry found that patients who were diagnosed with neuropsychiatric problems like anorexia nervosa and obsessive-compulsive disorder were more likely to have gotten a vaccine within the three months leading up to their diagnosis. The influenza vaccine in particular was linked to a higher rate of anxiety disorder, tic disorder, anorexia, and obsessive-compulsive disorder.

The study’s authors said that they believed the body’s immune response to the vaccines could be responsible for this effect. Vaccines prod the immune system to generate antibodies against bacteria and viruses, and sometimes these antibodies cross-react with human brain proteins. They also say that children who are experiencing inflammation at the time of their vaccination could see a particularly strong effect on brain development, although their study did not look into vaccination timing specifically. There may also be a genetic factor at play, and some doctors even believe the act of getting the vaccine could be traumatizing enough to sensitive children to spur psychological conditions. The study’s authors would like to see further studies carried out in order to explore this connection in more depth.

It’s not just vaccines that are bombarding us with neurotoxic aluminum; it is also found in many medications, cosmetics, cleaning products, and soft furnishings, giving people a tremendous dose of this very dangerous substance. Unfortunately, it’s hard to avoid the second most-used metal on the planet after steel.

With depression now the leading cause of disability worldwide, it’s surprising that researchers aren’t looking more into the connection between vaccines and depression. Of course, it works out quite well for the pharmaceutical companies that profit from the vaccines and the antidepressants that many people will end up needing as a result of vaccination.

Scientists have been aware of aluminum’s neurotoxicity for decades.

Although aluminum’s apologists have tried to shroud the metal’s risks in manufactured controversy, a growing number of reports by researchers in the United Kingdom, France, Canada, Israel, the U.S. and elsewhere has furnished substantive evidence linking aluminum to neuropathology, including the epidemics of Alzheimer’s disease (AD) and autism spectrum disorder (ASD).

Aluminum levels were particularly high in the male brains, including in a 15-year-old boy with ASD who had the study’s single highest brain aluminum measurement.

Dr. Christopher Exley — one of the world’s leading experts on aluminum toxicity — has shown that chronic intoxication with myriad forms of this “ubiquitous and omnipresent metal” is exacting a high price on human health.

Dr. Exley and other aluminum experts such as molecular biologist Dr. Lucija Tomljenovic have confirmed that aluminum readily and actively traverses the blood-brain barrier to selectively accumulate in brain tissues, where it induces unwelcome changes in brain biochemistry.

As Dr. Exley has noted, “There are no ‘normal’ levels of brain aluminum,” meaning that “its presence in brain tissue, at any level, could be construed as abnormal” [emphasis added].

Below is a video of him speaking on his study.

Documenting Aluminum in the ASD Brain

In light of the fact that even minute amounts of aluminum can have adverse neurological consequences, Dr. Exley’s newest paper — which reports on the first-ever study of aluminum in ASD brain tissue — is groundbreaking.

Published in the Journal of Trace Elements in Medicine and Biology, the paper documents some of the highest values for aluminum in human brain tissue ever recorded. Using a two-pronged study design (see box), the researchers measured and characterized aluminum deposits in brain tissues from five to ten ASD donors, most of whom died in their teens or twenties.

Frozen tissue was available from one female donor (age 44) and four male donors (ages 15, 22, 33 and 50) who, when alive, had a confirmed ASD diagnosis. The researchers quantified aluminum levels in 59 tissue samples representing five different areas of the brain (frontal, parietal, occipital, temporal and hippocampal).

Qualitative component: Using a technique called fluorescence microscopy, the researchers visualized aluminum deposits according to their presence (a) insideversus outside the brain cells and (b) in the two types of brain tissue (grey matterversus white matter).

For this component, fixed tissue samples were available for the same five donors plus an additional five donors diagnosed with ASD, including two females (ages 13 and 29) and three males (ages 14, 22 and 29).

What the research team found was startling. The study’s quantitative arm documented “consistently high” aluminum levels representing “some of the highest values for brain aluminum content ever measured in healthy or diseased tissues.” Specifically:

The Importance of Glial Cells

There are three broad categories of non-neuronal (glial) cells, including astrocytes (which support neuronal signaling), oligodendrocytes (which create myelin) and microglia (responsible for repairing damage). In discussing their results, Dr. Exley’s team comments that the intracellular location of most of the aluminum in these non-neuronal cells was the “standout observation” for ASD.

…environmental factors can alter microglia function, negatively affecting brain development and synaptic connectivity; when this occurs during important developmental periods, there may be ‘consequences throughout life.’

Unlike other brain cells, the microglia (which represent about 10% of brain cells) are dedicated immune cells. Microglia also play a key role in the process known as synaptic pruning that takes place during vital phases of cognitive development in early childhood as well as adolescence, continuing into the late 20s.

This process, which some observers have likened to “neural spring cleaning,” allows the maturing brain to shed “weak or redundant [neuronal] connections.” Given this and other important microglial functions, the microglia have attracted considerable research attention as key players in brain disease, including autism.

(Astrocytes also have implications for autism, given the role of astrocyte dysfunction in seizures — a condition that is frequently comorbid with ASD.)

A pivotal review article published in 2017 observes that “microglia are now known to be active participants in brain function and dysfunction” and notes that “aberrant [synaptic] pruning during critical developmental periods could contribute to neurodevelopmental disorders.”

It is clear to many researchers that environmental factors can alter microglia function, negatively affecting brain development and synaptic connectivity; when this occurs during important developmental periods, there may be “consequences throughout life.”

The Most Pervasive Exposure to Aluminum

The study’s results strongly suggest that aluminum is entering the brain in ASD via cells that have become loaded up with aluminum in the periphery. Where is the aluminum coming from? One of the most pervasive routes of modern-day exposure to neurotoxic aluminum is via aluminum adjuvants in vaccines.

Elsewhere, Dr. Exley has described the “migratory capabilities” of aluminum-based adjuvants “at sites distant to the injection site,” including the brain.

The extreme levels of aluminum found in the brains of the study’s teenage donors have alarming implications for the entire generation of highly aluminum-vaccinated children.

In the ASD brain paper, Dr. Exley and coauthors point out that the “burgeoning” use of aluminum-adjuvant-containing childhood vaccines “has been directly correlated with increasing prevalence of ASD.”

A 2011 study by Lucija Tomljenovic and Christopher Shaw confirms that aluminum-containing vaccines are having crippling neurological consequences.

Their analysis shows that children from countries where ASD prevalence is highest have the highest exposure to aluminum from vaccines; moreover, children’s increased exposure to aluminum adjuvants over the two decades starting in the 1990s significantly correlates with the increase in ASD prevalence in the U.S. Counting the shots now pushed during pregnancy, highly vaccinated American children may receive up to 73 total vaccine doses by age 18, including multiple rounds of injected aluminum. 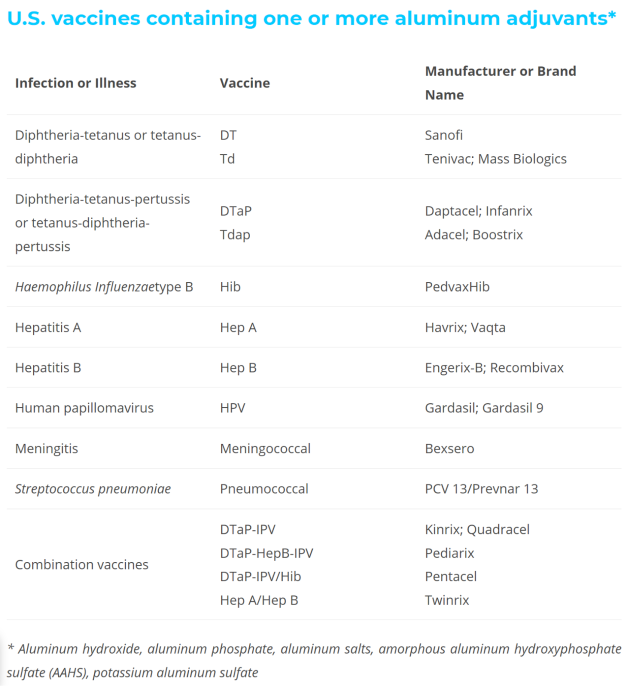 Crucially, Dr. Exley and coauthors note that what “discriminates [their] data from other analyses of brain aluminum in other diseases is the age of the ASD donors” [emphasis added].

The extreme levels of aluminum found in the brains of the study’s teenage donors have alarming implications for the entire generation of highly aluminum-vaccinated children.

Moreover, Dr. Exley’s other research has consistently shown that aluminum is the most significant contributing factor to Alzheimer’s disease.

Given that it is no longer unheard of to see Alzheimer’s being diagnosed in people who are in their 20s, 30s, or 40s, it is not unreasonable to worry that a catastrophic new wave of AD may be about to compound children’s already heavy burden of ASD and other neurological disorders.

Recognizing the risks, numerous researchers have called for a halt to the use of aluminum salts in vaccines. The powerful results of this study underscore the urgency of heeding this plea as well as eliminating exposure to other sources of neurotoxic aluminum.