“I wonder about Trump’s antagonism towards China. Is he emphasizing it for the wrong reasons?

See below from Pepe Escobar. In the past, Escobar has been on-point as to US geopolitical conflicts. Could this be the darkest side of the story? Could we have started a biological attack on China’s economy and it backfired? I’d rather believe not, but past research at Fort Detrick, Maryland, now recently shut down, has done the world a lot of harm, going back to our Swine Flu fever attack on Cuba under Nixon. We wiped out the entire pig population of an island we’re still aggressively sanctioning, as we are Iran and Venezuela. Now China? Is the US losing its cool?”

The fallout from the COVID-19 outbreak puts Beijing and Washington on a collision course, writes Pepe Escobar.

COVID-19: China Locked in Hybrid War with US

By Pepe Escobar
The Asia Times

Among the myriad, earth-shattering geopolitical effects of coronavirus, one is already graphically evident. China has re-positioned itself. For the first time since the start of Deng Xiaoping’s reforms in 1978, Beijing openly regards the U.S. as a threat, as stated a month ago by Foreign Minister Wang Yi at the Munich Security Conference during the peak of the fight against coronavirus.

Beijing is carefully, incrementally shaping the narrative that, from the beginning of the coronavirus attack, the leadership knew it was under a hybrid war attack.

The terminology of President Xi Jinping is a major clue. He said, on the record, that this was war. And, as a counter-attack, a “people’s war” had to be launched.

Moreover, he described the virus as a demon or devil. Xi is a Confucianist. Unlike some other ancient Chinese thinkers, Confucius was loath to discuss supernatural forces and judgment in the afterlife. However, in a Chinese cultural context, devil means “white devils” or “foreign devils”: guailo in Mandarin, gweilo in Cantonese. This was Xi delivering a powerful statement in code. 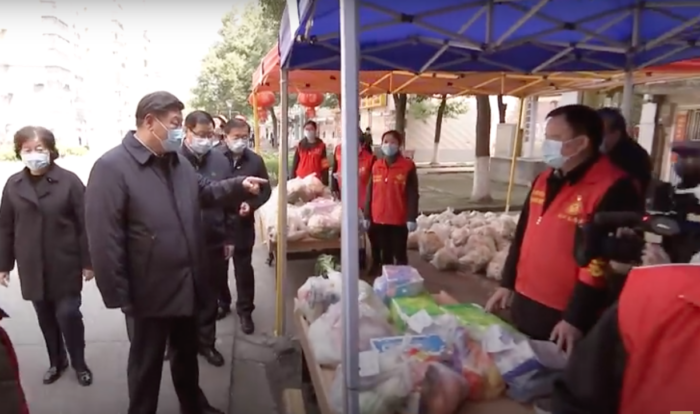 When Zhao Lijian, a spokesman for the Chinese Foreign Ministry, voiced in an incandescent tweet the possibility that “it might be US Army who brought the epidemic to Wuhan” – the first blast to this effect to come from a top official – Beijing was sending up a trial balloon signaling that the gloves were finally off. Zhao Lijian made a direct connection with the Military Games in Wuhan in October 2019, which included a delegation of 300 U.S. military.

He directly quoted U.S. CDC Director Robert Redfield who, when asked last week whether some deaths by Coronavirus had been discovered posthumously in the U.S., replied that “some cases have actually been diagnosed this way in the U.S. today.”

Zhao’s explosive conclusion is that COVID-19 was already in effect in the U.S. before being identified in Wuhan – due to the by now fully documented inability of the U.S. to test and verify differences compared with the flu.

Adding all that to the fact that coronavirus genome variations in Iran and Italy were sequenced and it was revealed they do not belong to the variety that infected Wuhan, Chinese media are now openly  asking questions and drawing a connection with the shutting down in August last year of the “unsafe” military bioweapon lab at Fort Detrick, the Military Games, and the Wuhan epidemic. Some of these questions had been asked– with no response – inside the U.S. itself.

Extra questions linger about the opaque Event 201 in New York on October 18, 2019: a rehearsal for a worldwide pandemic caused by a deadly virus – which happened to be coronavirus. This magnificent coincidence happened one month before the outbreak in Wuhan.

Irrespective of its origin, which is still not conclusively established, as much as Trump tweets about the “Chinese virus,” COVID-19 already poses immensely serious questions about biopolitics (where’s Foucault when we need him?) and bio-terror.

The working hypothesis of coronavirus as a very powerful but not Armageddon-provoking bio-weapon unveils it as a perfect vehicle for widespread social control — on a global scale. 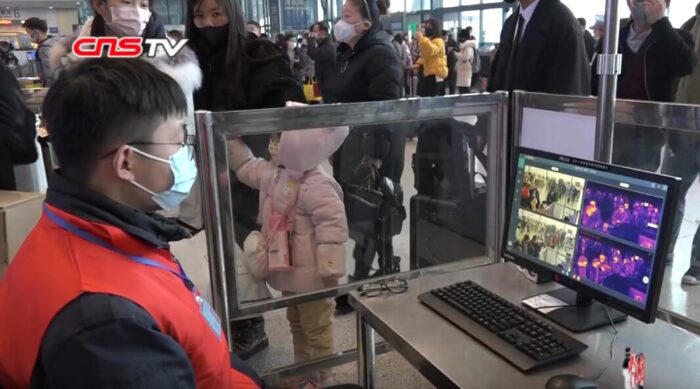 Just as a fully masked Xi visiting the Wuhan frontline last week was a graphic demonstration to the whole planet that China, with immense sacrifice, is winning the “people‘s war” against COVID-19, Russia, in a Sun Tzu move on Riyadh whose end result was a much cheaper barrel of oil, helped for all practical purposes to kick-start the inevitable recovery of the Chinese economy. This is how a strategic partnership works.

The chessboard is changing at breakneck speed. Once Beijing identified coronavirus as a bio-weapon attack the “people’s war” was launched with the full force of the state. Methodically. On a “whatever it takes” basis. Now we are entering a new stage, which will be used by Beijing to substantially recalibrate the interaction with the West, and under very different frameworks when it comes to the U.S. and the EU.

Soft power is paramount. Beijing sent an Air China flight to Italy carrying 2,300 big boxes full of masks bearing the script, “We are waves from the same sea, leaves from the same tree, flowers from the same garden.” China also sent a hefty humanitarian package to Iran, significantly aboard eight flights from Mahan Air — an airline under illegal, unilateral Trump administration sanctions.

Serbian President Aleksandar Vucic could not have been more explicit: “The only country that can help us is China. By now, you all understood that European solidarity does not exist. That was a fairy tale on paper.”

Under harsh sanctions and demonized since forever, Cuba is still able to perform breakthroughs – even on biotechnology. The anti-viral Heberon – or Interferon Alpha 2b – a therapeutic, not a vaccine, has been used with great success in the treatment of coronavirus. A joint venture in China is producing an inhalable version, and at least 15 nations are already interested in importing the therapeutic.

Now compare all of the above with the Trump administration offering $1 billion to poach German scientists working at biotech firm Curevac, based in Thuringia, on an experimental vaccine against COVID-19, to have it as a vaccine “only for the United States.”

Sandro Mezzadra, co-author with Brett Neilson of the seminal “The Politics of Operations: Excavating Contemporary Capitalism,” is already trying to conceptualize where we stand now in terms of fighting COVID-19.

We are facing a choice between a Malthusian strand – inspired by social Darwinism – “led by the Johnson-Trump-Bolsonaro axis” and, on the other side, a strand pointing to the “requalification of public health as a fundamental tool,” exemplified by China, South Korea and Italy. There are key lessons to be learned from South Korea, Taiwan and Singapore.

The stark option, Mezzadra notes, is between a “natural population selection,” with thousands of dead, and “defending society” by employing “variable degrees of authoritarianism and social control.” It’s easy to imagine who stands to benefit from this social re-engineering, a 21st century remix of Poe’s “The Masque of the Red Death.”

Amid so much doom and gloom, count on Italy to offer us Tiepolo-style shades of light. Italy chose the Wuhan option, with immensely serious consequences for its already fragile economy. Quarantined Italians remarkably reacted by singing on their balconies: a true act of metaphysical revolt.

St. Corona by the Master of the Palazzo Venezia Madonna in the National Gallery of Denmark.(Wikimedia Commons)

Not to mention the poetic justice of the actual St. Corona (“crown” in Latin) being buried in the city of Anzu since the 9th century. St. Corona was a Christian killed under Marcus Aurelius in 165 AD, and has been for centuries one of the patron saints of pandemics.

Not even trillions of dollars raining from the sky by an act of divine Fed mercy were able to cure Covid-19. G-7 “leaders” had to resort to a videoconference to realize how clueless they are – even as China’s fight against coronavirus gave the West a head start of several weeks.

Shanghai-based Dr. Zhang Wenhong, one of China’s top infectious disease experts, whose analyses have been spot on so far, now says China has emerged from the darkest days in the “people’s war” against Covid-19. But he does not think this will be over by summer. Now extrapolate what he’s saying to the Western world.

It’s not even spring yet, and we already know it takes a virus to mercilessly shatter the Goddess of the Market. Last Friday, Goldman Sachs told no fewer than 1,500 corporations that there was no systemic risk. That was false.

New York banking sources told me the truth: systemic risk became way more severe in 2020 than in 1979, 1987 or 2008 because of the hugely heightened danger that the $1.5 quadrillion derivative market would collapse.

As the sources put it, history had never before seen anything like the Fed’s intervention via its little understood elimination of commercial bank reserve requirements, unleashing a potential unlimited expansion of credit to prevent a derivative implosion stemming from a total commodity and stock market collapse of all stocks around the world.

Those bankers thought it would work, but as we know by now all the sound and fury signified nothing. The ghost of a derivative implosion – in this case not caused by the previous possibility, the shutting down of the Strait of Hormuz – remains.

We are still barely starting to understand the consequences of Covid-19 for the future of neoliberal turbo-capitalism. What’s certain is that the whole global economy has been hit by an insidious, literally invisible circuit breaker. This may be just a “coincidence.” Or this may be, as some are boldly arguing, part of a possible, massive psy-op creating the perfect geopolitlcal and social engineering environment for full-spectrum dominance.

Additionally, along the hard slog down the road, with immense, inbuilt human and economic sacrifice, with or without a reboot of the world-system, a more pressing question remains: will imperial elites still choose to keep waging full-spectrum-dominance hybrid war against China?

Pepe Escobar, a veteran Brazilian journalist, is the correspondent-at-large for Hong Kong-based Asia Times. His latest book is “2030.” Follow him on Facebook.

This article is from The Asia Times.

The views expressed are solely those of the author and may or may not reflect those of Consortium News.