Now Iran and Iraq BOTH want the US to leave the Middle East, but it never will

Posted by Lou on January 11, 2020
Posted in: Imperialism, Iran, Iraq, Political science, Trumpf, USA. Leave a comment
“Trump made that much clear when he said Iraq would have to compensate the US for the construction of the Al Asad Airbase, which “cost billions of dollars to build.” He even threatened Baghdad with sanctions “like they’ve never seen before, ever.” Think about that. Trump wants Iraq to compensate Washington for a military base that the US constructed not to do battle against Islamic State, but to conquer Iraq back in 2003!”
Source
http://www.rt.com/op-ed
9 Jan, 2020
Robert Bridge
Robert Bridge is an American writer and journalist. He is the author of the book, ‘Midnight in the American Empire,’ released in 2013. 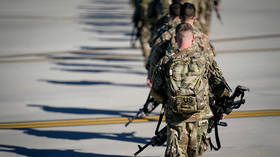 © BRYAN WOOLSTON / Reuters
Imagine waking up one day – as Iraq did – to find the US superpower on your couch. Not only was it not invited, it is breaking things and provoking neighbors. You politely ask it to leave, but it just scoffs at you.

It would be difficult to name another New Year in recent memory that got off to a more precipitous start than 2020. After Tehran carried out a measured retaliatory strike against two US military bases inside Iraq following the assassination of Iranian General Qassem Soleimani, the world – unaware that Iran was not aiming to kill, just sending an unmistakable message – held its collective breath.

Suddenly, the fate of the Middle East, if not planet Earth itself, seemed to hang perilously in the balance as the world wondered how a real estate developer turned US commander-in-chief – in a critical election year, mind you, with the opposition breathing down his neck – would respond to the ‘humiliation’ of Iranian leaders refusing to turn the other cheek.

Have you EVER seen such a sea of humanity in your life, @realdonaldtrump?

Do you still want to listen to the clowns advising you on our region?

And do you still imagine you can break the will of this great nation & its people?

End of malign US presence in West Asia has begun. 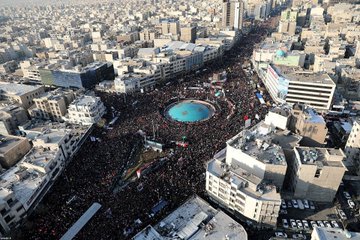 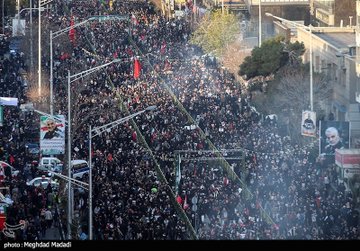 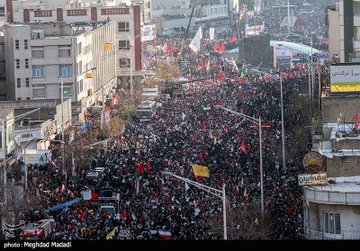 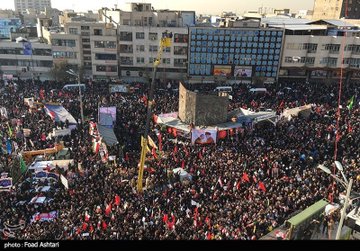 Although the situation has calmed following the tit-for-tat exchange, the question of America’s ongoing commitment to the region promises to get very complicated. After all, it’s not just Iran and Iraq who are complaining about the US military double-parked in the Middle East. Indeed, one of the main reasons Donald Trump was voted into the White House was due to his campaign pledge to ‘bring home the troops’ from the quagmires of regimes past. Yet today, the US leader seems determined to dig in even deeper.

“America… goes not abroad, in search of monsters to destroy,” John Quincy Adams, sixth president of the United States, wrote in seemingly saner times. “She is the well-wisher to the freedom and independence of all.”

Obviously, that comment has not aged very well over the centuries.

Even before Adams’ time, Spanish writer Miguel de Cervantes attempted to show in his novel ‘Don Quixote’ that men can easily fool themselves into believing that mortal enemies exist where in fact they do not. Thus, Don Quixote, obsessed with slaying the monsters of his fervent imagination, journeyed far and wide on his lame horse, ‘tilting at windmills,’ as it were.

In March 2003, the US began ‘tilting at windmills’ in earnest with the invasion of Iraq, which was rumored to be harboring the ‘dragons’ of WMDs. Despite that tragically flawed intelligence, the US went on to build military outposts around the embattled country, as well as the world’s largest embassy, which is nearly the size of Vatican City. This is what the US likes to refer to as “being invited” into a foreign country: you make your presence so formidably felt that removing the ‘guest’ becomes an act of suicide.

All is well! Missiles launched from Iran at two military bases located in Iraq. Assessment of casualties & damages taking place now. So far, so good! We have the most powerful and well equipped military anywhere in the world, by far! I will be making a statement tomorrow morning.

As Washington would soon come to understand, however, chasing imaginary monsters can have real consequences. That much was obvious in 2014 with the arrival of Islamic State, the terrorist organization that sprang to life out of the spiraling hellfire of Iraq. Only after expending billions of dollars, and getting immense assistance from the Russian military, was ISIS and its oil-exporting business soundly defeated in Syria.

At that point, the American juggernaut had come full circle.

Iraq loses its patience, too late?

Now that the global storm known as Islamic State has largely blown over, Baghdad understands that America’s continued presence in the country is not just an incredible irritant; it is preventing the emergence of real peace in the region. In fact, although the details remain sketchy, it appears that General Soleimani may have been on something of a peace-seeking mission in Iraq at the time of his assassination.

As Iraqi Prime Minister Adil Abdul-Mahdi revealed to lawmakers: “I was supposed to meet him in the morning the day he was killed, he came to deliver a message from Iran in response to the message we had delivered from the Saudis to Iran.”

Whether or not anything particularly beneficial would have emerged from those reportedly missed communications – like the cessation of sectarian Sunni-Shia strife now pulling apart the Middle East, for example – may never be known. Yet it is certainly possible that the US may have been attempting to thwart any possible rapprochement between Riyadh and Tehran.

Whatever the case, Iraq is now seeking to recover its sovereignty from the US, demanding that American troops pack up their gear and get out of Dodge. Many Iraqis vented their anger at the US Embassy, which they view as a symbol of the “huge American footprint” in the Middle East. Iraqi lawmakers understand better than anyone, however, that their vote to expel the American ‘hyper-power’ was largely a symbolic gesture. Washington will never agree to surrender a single square inch of real estate on Iraqi land, especially as the possibility of a military showdown against Iran – together with its revived nuclear ambitions – ramps up.

Trump made that much clear when he said Iraq would have to compensate the US for the construction of the Al Asad Airbase, which “cost billions of dollars to build.” He even threatened Baghdad with sanctions “like they’ve never seen before, ever.” Think about that. Trump wants Iraq to compensate Washington for a military base that the US constructed not to do battle against Islamic State, but to conquer Iraq back in 2003! That almost sounds like a page torn from ‘The Art of the Deal.’ But even if Iraq somehow came up with the cash to make the Yankees go home, Trump would find an excuse or some convenient emergency to reject it. The existence of Iran guarantees that much.

Had a very good meeting with @kbsalsaud of Saudi Arabia. We discussed Trade, Military, Oil Prices, Security, and Stability in the Middle East!

The unfortunate truth of the matter is that Iraq, as well as the entire Middle East, will have to get used to the idea of sharing living space with a meddling American superpower that refuses to go home, and long after its welcome has ended, if it ever began. Its unwieldy presence will do nothing, however, to enhance the prospect of peace and security in the region, as the cold-blooded murder of Qassem Soleimani attests to. This regrettable fact will make life exceedingly difficult not only for the citizens of the Middle East, but for the United States and its servicemen as well. After all, who really wants to continue hanging around a house where they are not welcomed, indeed, despised?

Perhaps one day the United States will come around to the self-realization that Don Quixote experienced, thanks to the help of his donkey-riding friend, Sancho, that he had been misguided in his lifelong quest, and that the only real monsters that needed slaying were those inside of his deranged mind.

Only then will America, and the world, truly find real peace and happiness.