FILE PHOTO: Supporters of WikiLeaks founder Assange demonstrate in front of the Ecuadorian presidential palace in Quito, 2018 © Reuters /
The UN’s Special Rapporteur on torture has called for a “full investigation” into the role Sweden played in driving WikiLeaks founder Julian Assange into asylum and eventual custody, after the rape case against him was dropped.

Swedish prosecutors announced on Tuesday that they would drop a dubious rape inquiry against Assange, as oral testimony against the publisher had “weakened,” and corroborating evidence was not strong enough to pursue a case. A Swedish arrest warrant was issued against assange in 2010, and a British court upheld a decision to extradite him in 2012. Threatened with what many saw as a politically motivated extradition, Assange sought refuge in London’s Ecuadorian embassy.

“Today’s collapse of Sweden’s #Assange investigation was inevitable,” rapporteur Nils Melzer tweeted on Tuesday. “Given its gross arbitrariness, there must now be a full investigation, and accountability & compensation for the harm inflicted on #JulianAssange.”

Today’s collapse of Sweden’s #Assange investigation was inevitable. Given its gross arbitrariness, there must now be a full investigation, and accountability & compensation for the harm inflicted on #JulianAssange https://twitter.com/nilsmelzer/status/1193841574586781698 …

#Assange: My follow-up letter of 12 Sept asking #Sweden to explain, point by point, the #HumanRights compliance of 50 perceived due process violations, to conduct a prompt & impartial investigation and reiterating my unanswered queries of 28 May. Link: http://bit.ly/2NXUAEN 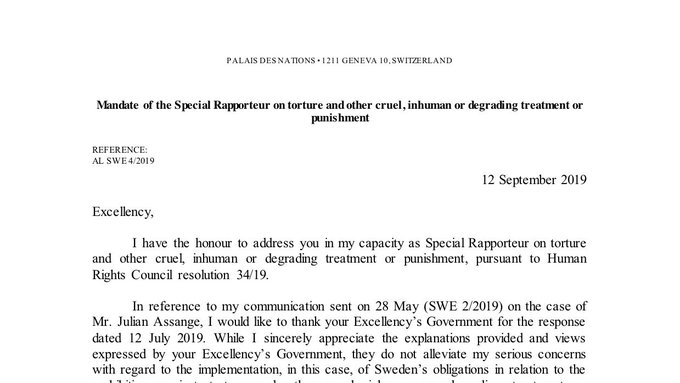 1,079 people are talking about this

Melzer had previously claimed that Assange was subjected to “psychological torture” and had his due process rights “systematically violated” by the governments of Britain and Sweden. The WikiLeaks founder is still languishing in a maximum security unit at Belmarsh prison, awaiting a hearing on extradition to the US, where he potentially faces 175 years behind bars for publishing leaked military documents.

ALSO ON RT.COMAssange ‘MAY DIE in jail for revealing war crimes,’ his father warns after seeing him behind bars

In a document tweeted by Melzer, the envoy accuses Sweden of “actively and knowingly” contributing to Assange’s torture, and accuses prosecutors there of working in tandem with Britain’s Crown Prosecutorial Service to keep the case against Assange alive in the face of exculpatory evidence.

With the rape case against him dropped, some commentators have warned that the path to extradition to the US may now be clearer. WikiLeaks editor-in-chief Kristinn Hrafnsson told supporters that their focus should now shift to the most important “threat” that Assange was “warning about for years: the belligerent prosecution of the United States and the threat it poses to the First Amendment.”