Pump it up! US Fed adds $104 billion in liquidity to markets in just one day

What is $104 billion out of the 23 trillion dollars debt the USA is carrying? It’s all imaginary money now. 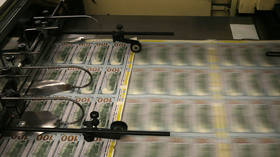 © AFP / Mark Wilson
The Federal Reserve, which has been boosting liquidity since mid-September, injected $104.293 billion to the financial markets on Thursday.

The addition of liquidity came in two parts, with one happening via overnight repurchase agreements totaling $73.593 billion. The other was from a $30.7 billion 13-day repo operation. In both interventions, dealers took less money than the Fed was willing to provide.

ALSO ON RT.COMUS Federal Reserve’s monetary policy is a BLACK HOLE that will swallow up everyone – RT’s Keiser Report

The US Central Bank’s market operations are aimed at ensuring that the financial system has enough liquidity, after the short-term funding rate spiked to 10 percent from two percent overnight in September. The effective Fed-funds rate stood within the target rate on Wednesday, at 1.55 percent. The broad general collateral rate for repo trading stood at 1.54 percent.

The Federal Reserve’s practice of adding and subtracting liquidity from short-term markets to manage short-term interest rates goes back decades. However, it is raising concerns among analysts and portfolio managers who claim that the size of recent operations are large and may not be enough to solve lending pressures.

One comment on “Pump it up! US Fed adds $104 billion in liquidity to markets in just one day”