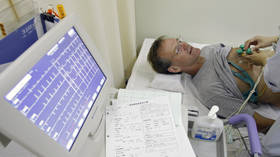 FILE PHOTO: A patient undergoes an electrocardiogram (ECG) test at Juntendo University Hospital in Tokyo, Japan. ©  Reuters / Kim Kyung-Hoon
An artificial neural network has been used to accurately predict a person’s chances of dying within a year by analyzing heart scans, even where doctors can find no issues, leaving scientists equal parts baffled and thrilled.

Researchers led by Brandon Fornwalt at the Pennsylvania-based Geisinger Health System put their machine learning model to work studying the results of some 1.8 million electrocardiogram (ECG) heart scans, hoping the neural network would derive patterns from the heaps of data.

Predicting the risk of a heart attack or other heart-related issues, the AI performed better than its human counterparts, consistently scoring above flesh-and-blood doctors. Even for ECG results that cardiologists determined to be normal, the AI was able to pick up on other patterns and accurately predict fatal health risks within a year’s time.

“That finding suggests that the model is seeing things that humans probably can’t see, or at least that we just ignore and think are normal,” Fornwalt said.

AI can potentially teach us things that we’ve been maybe misinterpreting for decades.

To further compare the AI’s methods to present-day doctors, the researchers also set up a second algorithm to consider other factors commonly measured by physicians, including age and gender, but the first model designed to crunch raw ECG data alone still won out in its forecasting abilities.

ALSO ON RT.COMGoogle sucks up & analyzes healthcare data on millions of Americans in secret AI project… after voluntary opt-in flops

The AI was trained based on historical ECG data, meaning that researchers already knew the outcome in each patient’s case and could measure the algorithm’s precision. But it is yet to be checked on real-time data in clinical studies to verify it can indeed predict and improve health outcomes. The research team at Geisinger will present its findings later this month at the American Heart Association’s Scientific Sessions in Philadelphia.

This is exciting and provides more evidence that we are on the verge of a revolution in medicine where computers will be working alongside physicians to improve patient care.