Climate SOS: 5-year period ending 2019 to be hottest on record

The vast majority of scientists on the planet have been warning us for years about global warming but many people still don’t believe it. They are like the proverbial frog being boiled alive. Unfortunately, all of us are that darned boiling frog.

If greenhouse gas emissions do not start falling soon there will be ‘hell to pay’, researchers warn.

A damning new UN report published on Sunday warned the world was falling badly behind in the race to avert climate disaster as a result of runaway warming, with the five years ending 2019 set to be the hottest ever.

The report comes ahead of a major United Nations climate summit on Monday when Secretary-General Antonio Guterres will push countries to increase their greenhouse gas reduction targets.

The report “highlights the urgent need for the development of concrete actions that halt global warming and the worst effects of climate change,” said its authors of the Science Advisory Group to the summit.

The average global temperature between 2015 and 2019 is on track to be the hottest of any five-year period on record, according to the report, which was compiled by the World Meteorological Organization.

The past four years were already the hottest since records began in 1850.

“I think the danger is growing – that means we have much less time to solve the problem than we thought we had. Basically if we want to tackle climate change, we have stop burning fossil fuels,” Tom Burke, chairman of anti-carbon group E3G, told Al Jazeera.

Guterres said last week the world was “losing the race” on climate change with the latest report spelling out the extent to which the gap between what is required and what is happening is widening.

Rather than falling, carbon dioxide grew two percent in 2018, reaching a record high of 37 billion tonnes.

More importantly, there is also no sign yet of reaching what is known as “peak emissions”, the point at which levels will start to fall, though these are not growing at the same rate as the global economy.

Patrick Verkooijen, chief executive of the Global Centre on Adaptation, told Al Jazeera that governments needed to show more ambition on their commitments – not only in mitigation, but also in investments for adaptation.

“The effects of climate change are here and now,” Verkooijen said from New York. “Whether you are an auto worker in Bangkok or a farmer in Africa or an elderly woman in Paris we are all impacted by climate change today.”

The 2015 Paris Agreement saw countries lay out national targets to reduce their emissions in order to limit long-term temperature rise by either 2C (35.6F) or 1.5C (34.7F).

These are benchmarks that will limit in important ways the effect of warming on world weather systems.

The current levels of ambition would need to be tripled to meet the 2C goal and increased five-fold to meet the 1.5C goal – technically still possible.

“This reads like a credit card statement after a five-year long spending binge,” said Professor Dave Reay, chair in Carbon Management at the University of Edinburgh.

“Our global carbon credit is maxed out. If emissions don’t start falling there will be hell to pay.”

If the world keeps temperatures to the 1.5C goal instead of the 2C, 420 million fewer people will be exposed to heat waves and 10 million fewer will be vulnerable to sea level rise, NASA climate scientist Cynthia Rosenzweig said on Sunday at a UN session.

“The last time Earth’s atmosphere contained 400 parts per million CO2 was about 3-5 million years ago,” the report said.

Other major findings show that the extent of Arctic summer sea ice has declined at a rate of 12 percent every 10 years over the past 40 years, with the four lowest values recorded between 2015 and 2019.

Overall, the amount of ice lost from the Antarctic ice sheet increased by a factor of six each year between 1979 and 2017, while glacier loss for 2015-2019 was also the highest for any five-year period on record.

Sea level-rise is also accelerating as is the process of acidification, with an increase of 26 percent in acidity today compared with pre-industrial periods, as a result of absorbing increased carbon dioxide in the atmosphere.

The report also found that heatwaves were the deadliest weather hazard in the 2015-2019 period, affecting all continents and setting new national temperature records.

The summer of 2019, which included July as the hottest ever month on record, saw unprecedented wildfires in the Arctic.

In June, these were responsible for emitting 50 megatonnes of carbon dioxide.

The report also comes at a time of increasing mobilisation over the question of climate change with millions taking part in a youth-led global strike on Friday, before the first UN youth climate summit on Saturday.

Millions of people around the world, from New York to Paris, Nairobi, Seoul, Bangkok, Islamabad and Johannesburg, have taken part in a global protest, calling for climate action. 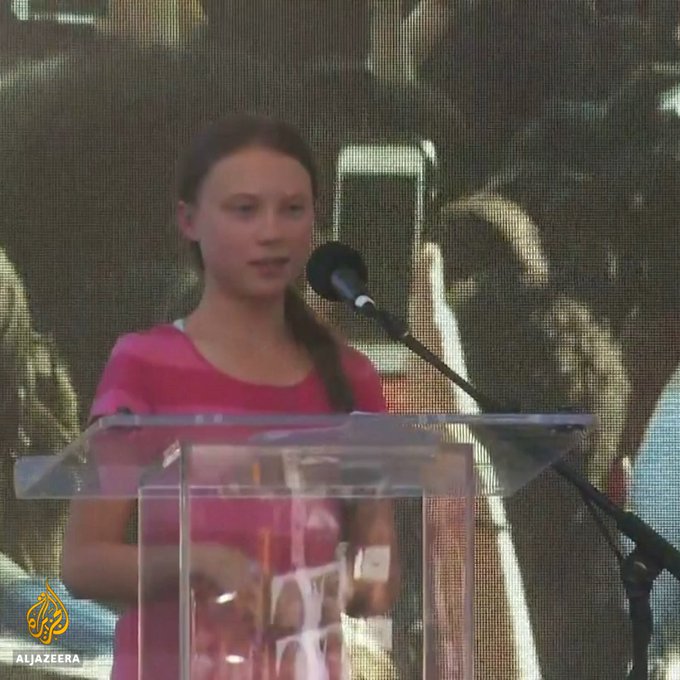 2,634 people are talking about this

Guterres wants nations to be carbon-neutral by 2050 – in other words, they will not add more heat-trapping greenhouse gases into the air than are removed by plants and perhaps technology each year.

There is a sense of urgency, Guterres said, because “climate change is the defining issue of our time”.

A larger, more international report looking at climate change and oceans and ice will be released by the Intergovernmental Panel on Climate Change on Wednesday.

Climate crisis: Are the mainstream media part of the problem?