What You’re Not Being Told About the Saudi Oil Attack

(TMU Op-Ed) — Saudi Aramco’s Abqaiq refinery, the largest oil processing facility in the world, and the Khurais oil field were reportedly attacked by a barrage of cruise missiles and drone strikes on Saturday.

Not surprisingly, United States President Donald Trump warned that the U.S. is “locked and loaded” to respond to the attack, but insisted that he was still waiting to verify who was responsible. U.S. Secretary of State Mike Pompeo immediately rushed to blame Iran, even while Yemen’s Houthi rebels claimed responsibility for the attack. A Saudi military spokesman said the initial investigation suggests “Iranian weapons” were used.

Thx @the_Jeff_Jones f/ alerting to breaking news reported by @JavierBlas. US govt releases satellite pics showing direct hits on critical spheroids use to treat the crude. We think this is a mths fix, not days/weeks. Oil going up even higher. #OOTT https://twitter.com/JavierBlas/status/1173335681508237314?s=09 … 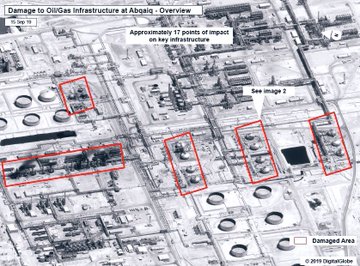 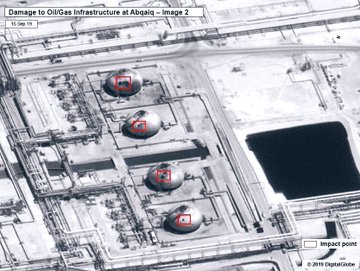 28 people are talking about this

On Sunday, the U.S. issued satellite images and cited intelligence as proof of Iran’s culpability. According to an unnamed U.S. official, Iran launched nearly a dozen cruise missiles and over 20 drones from its territory in order to carry out the attack.

However, some officials have contradicted this, stating instead that the attack likely came from Iran or Iraq.

293 people are talking about this

Iraq categorically denied any involvement after an anonymous Iraqi intelligence official told Middle East Eye that the strikes were launched from Iraqi territory and were in retaliation for Saudi-funded Israeli drone strikes in August on Iranian-trained forces in Syria.

While Iran has denied the accusations, the country has threatened that it is ready for war if need be.

One senior Islamic Revolutionary Guard Corps (IRGC) commander even told Tasnim that “everybody should know that all American bases and their aircraft carriers in a distance of up to 2000km around Iran are within the range of our missiles.”

Understandably, this recent attack has sent a shockwave through the global oil markets, cutting oil supplies by five percent as global oil prices surged more than ever before.

According to the Joint Organizations Data Initiative, as of this time last year, Saudi Arabian oil production averaged 10.7 million barrels a day, of which 7.43 million were exported.

We must ask ourselves how—while under the watchful eye of the world’s leading military superpower—was it possible for the world’s largest oil processing facility to be targeted so heavily and in such dramatic fashion?

As stated by the Council on Foreign Relations (CFR), “protecting Saudi Arabia and other Persian Gulf producers has been a cornerstone of U.S. foreign policy for decades” as “providing security for the oil-rich Persian Gulf region has been a U.S. priority since World War II.”

The Brookings Institution further argues that deterring Iran’s ability to encroach on Saudi oil fields is one of the main reasons for a continued American military presence in the region. To that end, the U.S. even provides Saudi terminals with sophisticated U.S.-made Hawk surface-to-air missiles.

According to an estimate by Securing America’s Future Energy (SAFE), the U.S. spends approximately $81 billion a year protecting oil supplies around the world. This calculation is allegedly on the conservative side, as it doesn’t include the full costs to “protect” oil fields in Iraq, for example.

This time last year, the U.S. president launched one of his infamous Twitter tirades in which he claimed the US was protecting countries in the Middle East all the while those same countries push for “higher and higher oil prices.” It is hard to imagine he could have meant anyone besides Saudi Arabia.

Bearing in mind that, not too long ago, the U.S. deployed 500 troops to the Kingdom for the first time since 2003 as a show of strength in Washington’s spat with Iran.

With so much support, even if the U.S. and Saudi Arabia were unable to deter or defend from such an attack, surely they would have at least have evidence of how it was perpetrated. And if that evidence does indeed exist, why was it not quickly presented in lieu of crying “Iran” (which is starting to sound a lot like crying “wolf”).

A handful of photos and anonymous statements are not going to cut it this time around.

Why is the U.S. government so sure that Iran was behind the attack and not the more likely culprit—the Houthi rebels who are currently locked in a brutal and deadly conflict with the Kingdom? After all, even the New York Times notes that Houthi drones have a range of nearly 1,000 miles, which give them the capability to strike Saudi territory.

In fact, the spokesman for the Houthi-allied Yemeni army, Brigadier General Yahya Saree recently told MintPress News, of a “new missile” and that vital targets within Saudi Arabia will be focused on.

MintPress reports that during a test, “Yemen’s Houthi-allied army launched a ballistic missile attack on a yet-unidentified military position in Saudi Arabia’s eastern Dammam province. The strike was the first time the Houthis or their allied forces stuck eastern Saudi Arabia, and the missile is reported to have traveled nearly 800 miles to reach its target. Dammam is a major oil export hub and houses several major companies including Saudi Aramco.”

According to Saree, the launching of the long-range ballistic missile was “a new and practical test of the Yemeni missile force.”

Notably, this attack appears to coincide with the inevitable departure of ruthless Iran-hawk John Bolton, and just three days before Israel’s election. If there was ever a time to ensure that the U.S. foreign policy establishment never takes off the table the threat of force against Iran, it would be now.

339 people are talking about this

This is not to say that Iran couldn’t have carried out the attack—it may very well have done so. But the evidence being pushing by U.S. mainstream media is lacking and, as stated previously, a handful of photos and anonymous claims are not sufficient.

After a maximum pressure campaign of crippling sanctions, constant threats of war and a handful of “mysterious” strikes targeting Iranian-backed forces in Iraq, Syria and Lebanon, perhaps Iran really has had enough. Perhaps Iran has decided to take matters into its own hands and respond militarily against vital U.S. interests.

We cannot rule out the possibility, but until we know the truth it is best not to speculate, given how high the stakes are.

In the meantime, despite the presence of U.S. troops and intelligence on the ground, the media is again insisting that we must rely on anonymous statements from military officials to justify our militaristic conclusions.

Recent history tells us that this is probably not a good idea.