(TMU) — The idea that there is no “Planet B” has long been a slogan for environmentalists trying to convey the gravity of the unfolding ecological catastrophe on our planet, but new research could render the mantra moot as scientists have revealed that exoplanets may exist in the universe that are capable of supporting abundant life-forms—and they could, in fact, be more hospitable a home than Earth.

Researchers have released a new study revealing the “surprising conclusion” that “conditions on some exoplanets with favorable ocean circulation patterns could be better suited to support life that is more abundant or more active than life on Earth,” according to geophysicist Stephanie Olson of the University of Chicago.

And while these exoplanets are so distant from our own solar system as to render it impossible to reach them with space probes, scientists are working on new remote sensing tools such as telescopes that would allow us to better understand what condition are actually like on these planets which may have the ability to support life on a scale unknown on our own planet.

Scientists have long estimated that roughly 35 percent of all known exoplanets larger than Earth are likely to be rich in water.

“NASA’s search for life in the Universe is focused on so-called Habitable Zone planets, which are worlds that have the potential for liquid water oceans,” Olson said.

What is an #exoplanet?

Planets that orbit around other stars are called exoplanets. Exoplanets are very hard to see directly with telescopes. So how do we look for Earth-like planets in other solar systems? 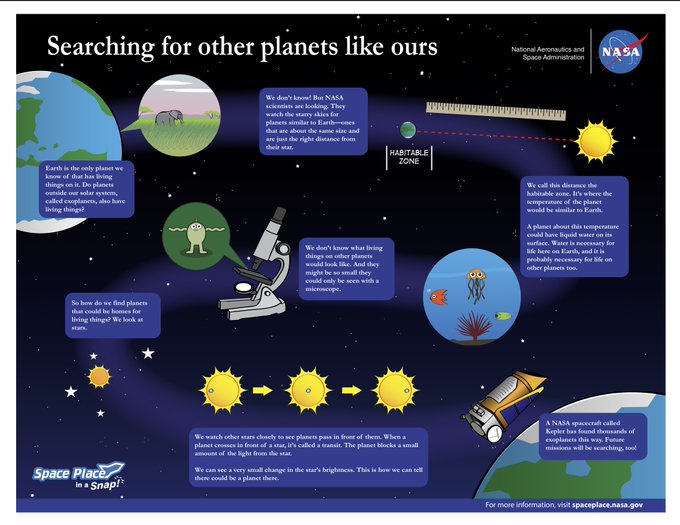 2,370 people are talking about this

“Our work has been aimed at identifying the exoplanet oceans which have the greatest capacity to host globally abundant and active life. Life in Earth’s oceans depends on upwelling (upward flow) which returns nutrients from the dark depths of the ocean to the sunlit portions of the ocean where photosynthetic life lives. More upwelling means more nutrient resupply, which means more biological activity. These are the conditions we need to look for on exoplanets.”

Olson’s team modeled a number of different types of exoplanets using ROCKE-3D software designed by NASA’s Goddard Institute for Space Studies (GISS) to create simulations of planetary bodies with their own unique climates and ocean habitats.

The research discovered that those planets with thicker and more dense atmospheres, slower rates of rotation, and the presence of continents all created higher upswelling rates. Olson noted:

“A further implication is that Earth might not be optimally habitable—and life elsewhere may enjoy a planet that is even more hospitable than our own.”

The research, which was presented as a keynote lecture at the Goldschmidt Geochemistry Congress in Barcelona, Spain, serves as a reminder that life is always more common than “detectable” life that lies in plain sight, Olson said. In the future, scientists should “should target the subset of habitable planets that will be most favorable to large, globally active biospheres because those are the planets where life will be easiest to detect—and where non-detections will be most meaningful,”she added.

Chris Reinhard of the Georgia Institute of Technology commented:

“We expect oceans to be important in regulating some of the most compelling remotely detectable signs of life on habitable worlds, but our understanding of oceans beyond our solar system is currently very rudimentary. Dr. Olson’s work represents a significant and exciting step forward in our understanding of exoplanet oceanography”.

Equipped with the knowledge contained in the study, scientists can now devise the best means through which to detect these new planets teeming with life. Olson concluded:

“Now we know what to look for, so we need to start looking.”