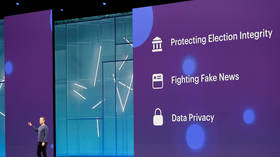 © Reuters / Stephen Lam
Facebook is dangling a multimillion-dollar carrot before cash-strapped news outlets, offering a hefty licensing fee in return for the right to use headlines and even entire stories in a new “news section,” insiders say.

The social media giant has offered mainstream outlets as much as $3 million per year for the privilege of using their headlines, article excerpts and stories, according to people familiar with the deal who spoke to the Wall Street Journal on Thursday. The Journal’s parent company Dow Jones was reportedly one of the companies approached, along with the Washington Post, Bloomberg, and ABC News.

Facebook plans to launch its “news section” in the fall, the insiders claim, though it is not known which – if any – of the outlets accepted the licensing offer. Many of them could certainly use the money. More than 3,200 jobs have been lost across online news media in 2019 alone, and many outlets are struggling to stay afloat with platforms like Facebook taking an increasing share of online advertising revenues. Facebook may have made these outlets an offer they can’t refuse.

Mark Zuckerberg’s platform has come under fire for cannibalizing ad revenues that once accrued to individual news outlets. Facebook and Google together took over 60 percent of US digital advertising revenues in 2018. Google alone made $4.7 billion in 2018 off the backs of news publishers, according to the News Media Alliance – and the journalists and publishers who created and posted that content didn’t see a cent of it.

Facebook has made a concerted effort to shore up mainstream media’s declining popularity, however, both by deplatforming alt-media competitors and by bankrolling expensive but sparsely-watched shows for its Facebook Watch internet TV platform featuring establishment darlings like CNN’s Anderson Cooper.

Last year, Facebook partnered with the notorious Atlantic Council to fight the lurking threat of “fake news” – just a few months before enacting a massive purge of popular political pages, some with millions of followers. The shuttered pages represented a wide variety of views from both the left and the right, with little in common other than their aversion to the mainstream narrative.

With the 2020 election a little over a year away, the social media behemoth no doubt has a few more tricks up its sleeve as it seeks to tighten control of the narrative in the hope of avoiding a repeat of 2016 – after which Facebook (along with everyone from actress Susan Sarandon to FBI chief James Comey) was blamed for failing to prevent Hillary Clinton’s election loss, and has been doing penance for it ever since.