How To Inoculate Yourself From Establishment Bullshit

Posted by Lou on July 25, 2019
Posted in: Mainstream media, Obomber, Political science, Politics, USA, War, War crimes. Leave a comment
“Imagine if war weren’t normalized. Imagine if a US plane dropping a bomb on foreign soil and ripping human bodies to shreds was treated as the horrific event that it actually is and given weeks of extensive investigative coverage, instead of something that happens many times every single day without any mention at all.”
Source
caitlinjohnstone.com
AUTHOR: CAITLIN JOHNSTONE
July 25, 2019

In a recent interview with CBS This Morning host Gayle King, former First Lady Michelle Obama contrasted her husband’s presidency with that of his successor by claiming that unlike Trump, the Obama family had had “no scandal”.

“I had to sit in [Trump’s inauguration] audience, one of a handful of people of color and then listen to that speech, and all that I had sort of held onto for eight years, watching my husband get raked over the coals, feeling like we had to do everything perfectly, you know, no scandal,” Obama said.

You hear this claim a lot from Democrats. There was a viral tweet with tens of thousands of shares shortly before the 2016 election which read, “8 years. No scandals. No mistresses. No impeachment hearings. Just class and grace, personified.” It’s a very common refrain which resurfaces in memes and tweets periodically, usually as criticisms of the sitting president.

8 years. No scandals. No mistresses. No impeachment hearings. Just class and grace, personified. I sure am going to miss this family.

Of course, the only reason anyone can attempt to claim that Barack Obama had “no scandals” is because in our bat shit crazy world, murdering, oppressing and exploiting large numbers of people isn’t considered scandalous.

The only reason liberals think Obama had a low-key, drama-free presidency is because that presidency was normalized for them by the establishment narrative managers of the political/media class. If that class had been shrieking about Obama’s warmongering, surveillance expansion, persecution of whistleblowers, crony capitalism etc in the way that it’s been shrieking about Trump’s nonexistent Russia ties or his obnoxious tweets, these same people would see Obama as a horrible monster. But the propagandists didn’t do that, because it would hinder the cause of bloodthirsty imperialism abroad and crushing austerity at home.

Democratic presidential candidate Tulsi Gabbard’s fairly mild differences with US foreign policy orthodoxy, for example, are treated as so freakishly bizarre that you routinely see establishment pundits making fascinatingly absurd statements about her and getting away with it. The Hill‘s Reid Wilson posted a tweet that got thousands of likes and shares saying “Hot take/prediction: Tulsi Gabbard is going to endorse Trump in the end.” Center for American Progress President Neera Tanden shared Wilson’s tweet with the hysterical caption, “My prediction: Tulsi runs as third party Green candidate to help Trump win. I will take bets on this.” Again, thousands of likes and retweets.

4,958 people are talking about this
Neither of these things are going to happen. Both Wilson and Tanden know they will never happen. Gabbard is a fairly conventional center-left Democrat who just wants to scale back US warmongering somewhat; she’s so well within the establishment-authorized Overton window that she just voted in favor of a House anti-BDS bill for Christ’s sake. But because she opposes a few aspects of the forever war and says it’s a good idea to communicate with world leaders who the US government doesn’t like, establishment attack dogs are acting like Hawaii’s second congressional district is being represented by some kind of eldritch tentacle beast from the Andromeda Galaxy.

I’m highlighting some of the more glaring recent examples here, but this sort of thing is happening all the time with varying degrees of subtlety. The public’s perceptions of events are continually being distorted by an establishment narrative management machine which controls what people view as normal and what they view as abnormal. You notice this very quickly when you start cultivating your news sense and paying attention to what news stories the mass media choose to give tons of coverage to and what stories they all but ignore; you notice almost immediately that there’s very little connection between how important a story is and how much news coverage it receives. The factor that determines the extent of coverage is the advancement of establishment interests and advertising revenue, in that order. Actual newsworthiness barely registers.

The way to rob the narrative managers of their ability to manipulate our sense of normalcy is to create an image of a sane and healthy world for ourselves to hold onto at all times, and to make that image into our own personal sense of what normal is. By having a vivid picture of what a sane and healthy world would look like in your mind, the false normal that the propagandists are trying to sell you will have no purchase.

Many people want to change the world, but hardly anyone ever sits down and creates a clear, positive image for themselves of a world in which all positive changes have been successfully put into full effect. Most people tend to just look at the current hot topic debates they’re seeing in the news over healthcare, immigration policies, gun control, austerity policies, abortion, LGBTQ issues, police brutality etc, and hope that those specific issues are resolved in their preferred way. But what if you zoomed out to a much bigger picture and imagined a healthy and harmonious world in which all our major problems have been resolved, and we’ve built something beautiful together? What would that be like?

I can’t envision such a world for you, because you and I will have different ideas about what a perfectly healthy and harmonious world looks like. I’m not trying to give you a specific image, I’m trying to get you to make a solid, lucid image of your own creation that can’t be replaced by the false normal the narrative managers are trying to implant in your mind day in and day out. Don’t hold back; go all the way and make the world as perfect as possible. All your ideas about what changes you might make are “realistic” or “unrealistic” are corrupted by propaganda anyway, so just create a perfect world.

She only gets to say this because in our bat shit crazy world, murdering, exploiting and oppressing large numbers of people isn’t considered scandalous. https://twitter.com/AccuracyInMedia/status/1152017717639036930 … 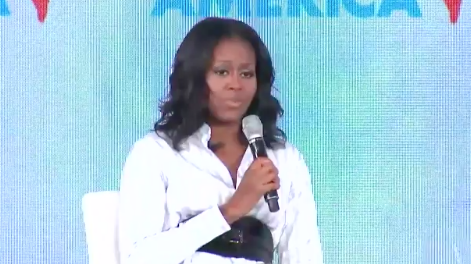 This is worth setting aside an hour or two and investing some serious mental energy into. Once you’ve got a positive image of a healthy and harmonious world, and once you have a really clear image of what it would be like to live in that world, it’s kind of like you become someone from that imaginary world who stepped into this one and gets to see it for the first time. You get to see life through the eyes of someone for whom “normal” isn’t endless violence, oppression, exploitation and degradation, but for whom normal is the absence of those things. This makes all of the insanity in this world stand out like a black fly on a white sheet of paper, and gives you the ability to clearly see and describe precisely what needs to change about our situation here.

You’ve already had a taste of this if you’ve ever had the unfortunate experience of having to explain what war is to a small child. Nothing about war makes sense to a creature who is looking at this world with fresh eyes; the confusion and upset which immediately flashes over their face will make you feel like an idiot even if you oppose war, just for being a part of a world where grown-ups engage in such idiotic behavior. Someone who came into this world from a healthy and harmonious parallel earth would see it very much the same way.

Imagine if war weren’t normalized. Imagine if a US plane dropping a bomb on foreign soil and ripping human bodies to shreds was treated as the horrific event that it actually is and given weeks of extensive investigative coverage, instead of something that happens many times every single day without any mention at all. A pundit on Fox or MSNBC will tell you that you’re a delusional imbecile if you think this should cease immediately. Anyone who’s seeing our world with unindoctrinated eyes knows you’re a delusional imbecile if you don’t.

All the injustices we’re trained like dogs to see as normal are like this. Corruption. Plutocracy. Wage slavery. The way the homeless are treated. The fact that there are homeless at all. Police militarization. The drug war. Prisons for profit. Government surveillance. Propaganda. All of these things are inherently disgusting, but we lose our accurate sense of disgust because we’ve been tricked into accepting them as normal. So remove the scales from your eyes by creating a new normal for yourself.

The best way to get around the internet censors and make sure you see the stuff I publish is to subscribe to the mailing list for my website, which will get you an email notification for everything I publish. My work is entirely reader-supported, so if you enjoyed this piece please consider sharing it around, liking me on Facebook, following my antics on Twitter, throwing some money into my hat on Patreon or Paypal, purchasing some of my sweet merchandise, buying my new book Rogue Nation: Psychonautical Adventures With Caitlin Johnstone, or my previous book Woke: A Field Guide for Utopia Preppers. For more info on who I am, where I stand, and what I’m trying to do with this platform, click here. Everyone, racist platforms excluded, has my permission to republish or use any part of this work (or anything else I’ve written) in any way they like free of charge.