FILE PHOTO: Greta Thunberg speaking at a climate protest in Berlin © Reuters / Fabrizio Bensch
With 16-year old Swedish environmentalist Greta Thunberg set to address the French parliament, a group of MPs have vowed to boycott the doomsday speech by the person they called an “apocalyptic guru” and “prophetess in shorts.”

Invited to the session by an environmental caucus called Accellerons – formed to fight what its members call “the climate emergency” – Thunberg will speak before French lawmakers on Tuesday.

However, some MPs from the conservative Republicans and National Rally parties are unimpressed.

“We don’t need apocalyptic gurus to fight climate change intelligently, we need scientific progress and political courage,” Republican Guillaume Larrivé tweeted, calling on his colleagues to give the session a miss. 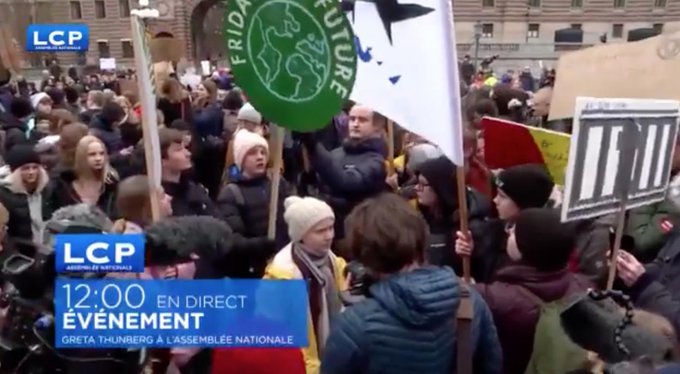 4,410 people are talking about this

Calling Thunberg the “winner of the Nobel fear prize,” Republican Julien Aubert announced that he wouldn’t show up to “applaud a prophetess in shorts.”

Thunberg has been referred to in similar terms before. Rising to fame for organizing school strikes against climate change last year, Thunberg has since switched her rhetoric from demanding action to welcoming the apocalypse with religious fervor.

“We probably don’t even have a future anymore,” she told British lawmakers in April, in a likely preview of her upcoming address in France.

“I don’t want you to be hopeful. I want you to panic. I want you to feel the fear I feel every day,” she told the power-brokers at the World Economic Forum in Davos, several months earlier.

Against the dying of the earth, Thunberg offers only one solution: the immediate lowering of carbon emissions to net zero, a move that would see modern civilization – including car and plane travel, electricity, and affordable food for the masses – essentially wiped out.

ALSO ON RT.COMTeen climate change campaigner Greta Thunberg to take year off school for US trip

While European politicians have yet to put any of her radical proposals into policy, they have still applauded her speeches and lined up for photo opportunities with her.

“If I say that I do not want to prostrate myself before Greta Thunberg, the 16-year-old child invited to the Assembly in front of the national representation, am I (still?) Politically correct?” asked National Rally MP Sébastien Chenu.

Criticism came from the political center too. Echoing criticism of Thunberg’s messianic worldview, Lawmaker Benedicte Peyrol of President Emmanuel Macron’s En Marche! Party asked why France couldn’t “honor its own scientists who’ve been active for years in trying to save the planet,” albeit with less theatrical flair.