Philippines President Rodrigo Duterte says he won’t answer to white people over alleged human rights violations – insisting that he will “only face, be tried or face a trial in a Philippine court, presided by a Filipino judge, [and] prosecuted by a Filipino,” adding “maybe they can reimpose the death penalty, [so I can] die in Filipino land.” 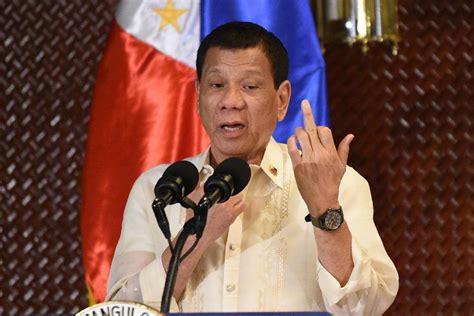 “I will not answer a Caucasian… You must be stupid. Who are you? I am a Filipino,” said Duterte. “We have our courts here. You have to bring me somewhere else? I would not like that. I have my country. It’s working, I know it’s working, justice is working here.”

Duterte comments follow a vote by the United Nations Human Rights Council on a resolution brought by Iceland to investigate alleged abuses. He is accused of overseeing thousands of extrajudicial killings, according to Newsweek. His administration is also accused of arbitrary arrests, detentions, kidnappings, and other measures amid an anti-drug crackdown.

Duterte had already suggested he could cut diplomatic ties with Iceland over its resolution, which passed the U.N. Human Rights Council by 18 to 14 votes, with 15 countries abstaining.

Ravina Shamdasani, a spokesperson for the U.N. Human Rights Office, told Newsweek: “The HRC resolution on the human rights situation in the Philippines and its request for a comprehensive written report is an opportunity for all stakeholders, including the government to assess the current state of human rights in the country and in particular to get clarity around the contested facts, figures and circumstances.” –Newsweek

The ‘formerly gay‘ Duterte, known for his inflammatory rhetoric, has claimed everything from throwing drug dealers out of helicopters to molesting his maid as a teenager.

The Human Rights Council expressed “concern at the allegations of human rights violations in the Philippines, particularly those involving killings, enforced disappearances, arbitrary arrest and detention, the intimidation and persecution of or violence against members of civil society, human rights defenders, indigenous peoples, journalists, lawyers and members of the political opposition, and restrictions on the freedoms of opinion and expression, peaceful assembly and association.”

Recently, Philippines Senator Ronald dela Rosa, the former police chief responsible for running Duterte’s war on drugs and an ally of the president, downplayed the death of a toddler during a police raid, saying “s*** happens.”

Myka Ulpina, 3, died in crossfire during a drugs raid by armed police in Rodriguez, Rizal. Ulpina’s father Renato also died in the shootout. Police reportedly accused him of using the girl as a shield, which her mother denied. An undercover officer was killed too. –Newsweek

“We are living in an imperfect world,” said former police chief Dela Rosa during a news conference, adding “Would a police officer want to shoot a child? Never, because they have children as well. But shit happens during operations.”