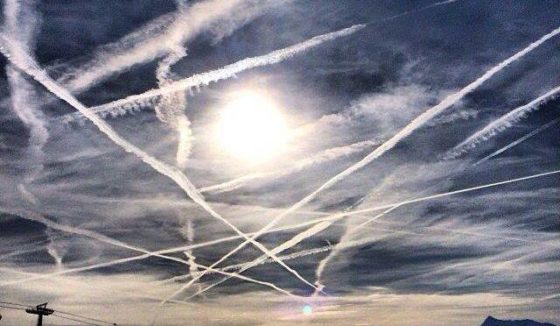 Scientists are warning that plans to “hack the Earth’s weather” could result in a third world war. If some countries take to the destruction of the Earth in the name of “climate change,” war could break out.

Although most elitists are in favor of geoengineering, which involves manipulating the atmosphere by blocking sunlight or isolating excess carbon, weather hacking in one region could have negative impacts in another and lead to global conflict,according to scientists. However, the United States has been using geoengineering unbeknownst to the masses for quite some time.

Andrea Flossmann, a scientist at the World Meteorological Organization, explained in a WMO report: “The atmosphere has no walls. What you add may not have the desired effect in your vicinity, but by being transported along might have undesired effects elsewhere.” According to Fox News, Earth’s temperatures are set to soar to dangerous levels so a lot of scientists think the unknown consequences of geoengineering are worth the risk.

Once upon a time, all over the world, we saw fluffy white clouds in a blue sky. Today we see white lines and streaks, and many of us, in many countries, live under a layer of white haze. Children no longer know what real clouds look like, as the three basic cloud types are no longer seen. -No Natural Weather: Introduction to Geoengineering 101

The worst-case scenario is that Earth’s atmospheric chemistry is irreversibly altered and causes freak weather conditions like monsoons, hurricanes, and heat waves that could kill thousands and increase global tensions. Of course, we are already living through that now thanks to the unnatural geoengineering going on already.

Dane Wigington runs the website Geoengineering Watch.org and has compiled a massive amount of data on the harm and damages geoengineering or “chemtrails” have done to the Earth.

“Stand back and consider: You can’t breathe without inhaling these [metal] particulates [used to reflect the sun’s rays]. They are completely saturating the air column. I assure you, this is building up in all of us. Lab tests prove this with hair, blood and urine . . . they are building up in all of us. Not only is it right here, right now, toxifying every breath we take, it is decimating the earth life support system, the protective layers of the atmosphere and the ozone layer. This is an all-out assault against life. This is being used as a weapon. These programs are not benevolent. In addition to being used as a weapon, climate engineering is being used to mask, and this is very important, it is being used to mask the full severity of climate collapse from the population by confusing and dividing people. . . . They are going to keep covering this up until the last possible moment.” –Dane Wigington

Visit Geoengineering Watch.org for more information on the ongoing efforts by governments to alter the weather.