Posted by Lou on May 15, 2019
Posted in: Climate change, Earth, Earthquakes, Fireballs and meteors, Global warming, Video. Leave a comment
Sott.net
Mon, 13 May 2019 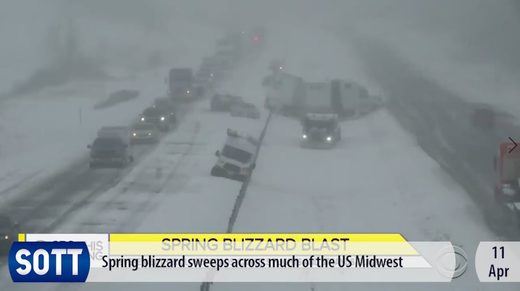 While the World Meteorological Organization keeps pushing the global warming swindle, claiming that 2018 was the warmest year on record, and the MET office claiming that April 22 was the hottest Easter Monday ever, reality hits hard with record cold temperatures and snowfall around the world… well into spring.

As the solar minimum intensifies, temperatures plummet. Unusually cold April temperatures affected more than 100 million people just in the US as the planting season took a serious hit around the world. The result is that farmers are going bankrupt in the US while in North Korea and China food production is suffering massive loses.

Spain, Portugal, Italy and Germany were also hit by unseasonable snowfalls, meanwhile French vineyards froze, compromising this year’s wine production. Africa was also hit by unusually low temperatures with Algeria and Morocco covered in snow this month. In the Southern Hemisphere, Western Australia had the coldest April day ever due to a huge antarctic front. The cold also interfered with wheat production in the country, with harvests hitting an 11 year low.

Record rain and floods in the Middle East not only promoted desert blooms at a very odd time of the year, but also wreaked havoc on the human population with thousands displaced in Iran and Afghanistan.

Two mayor earthquakes hit this April, a 6.3 M in the Philippines that left eight people dead, and a 6.1 M in Taiwan that left 17 people injured.

Windstorms have also been intensifying in unusual places as the jet streams continues its chaotic meandering, both China and Pakistan suffered the consequences this month.

All that, and more, in this month’s SOTT Earth Changes Summary…

Check it out on Sott.net’s Vimeo channel:

Music used: ‘Escape from the Temple‘ by Per Kiilstofte. Licensed under Creative Commons Attribution 4.0 International

To understand what’s going on, check out our book explaining how all these events are part of a natural climate shift, and why it’s taking place now:

Earth Changes and the Human-Cosmic Connection

Check out previous installments in this series – now translated into multiple languages – and more videos from SOTT Media here, here, or here.

You can help us chronicle the signs by sending your video suggestions to: