Alcohol may be slowing you down and destroying your health.

Source: 7 Things that Happen to Your Body When You Quit Drinking Booze 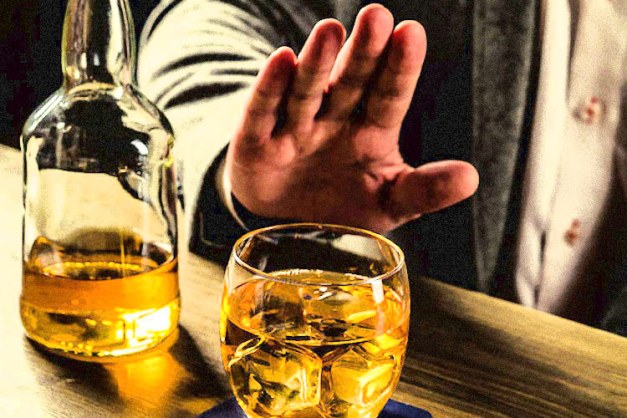 Alcohol is such an ingrained part of our culture that we rarely consider the negative effects it may be having on our health and wellness. In fact, the most dangerous drugs in the world are alcohol and tobacco, yet both of these can be freely purchased in almost any corner store or grocery market in the nation. Alcohol companies spend nearly $2 billion a year in the U.S. trying to convince you that alcohol is sexy and will make you a more fun person. All the while, the latest research reveals how destructive alcohol consumption is, even linking it to cancer.

The decision to quit drinking alcohol is a lot easier than actually quitting, because not only is alcohol addictive like other dangerous drugs, (quitting cold turkey can actually kill heavy drinkers), there is a tremendous amount of social and peer pressure involved.

Here are 7 things that will most likely happen to your body if you quit drinking alcohol.

1.) The Health of Your Liver Will Dramatically Improve

Alcohol is consumption is notoriously bad for the health of your liver, the organ which acts as the filter for the body, detoxifying the blood stream. Alcohol is high in glucose and the liver converts glucose into fat, which is why heavy drinkers often suffer from fatty liver disease which can cause scarring and liver failure.

“Anything that is eaten or consumed, whether it’s food, alcohol, medicine or toxins, gets filtered by the liver. Once we ingest food, it is digested by the stomach and intestine, gets absorbed into the blood and goes to the liver.” [Source]

The liver is also the organ known to manage the emotion of anger, and a dysfunctional or poisoned liver can result in emotional imbalances, which is why so many drunks are angry drunks. Once the body recognizes there is no more alcohol in the system, the liver can flush out remaining toxins, helping to improve liver performance which will have a positive impact on mood and emotional stability.

2.) It Improves the Balance of Good/Bad Bacteria in Your Gut

In recent years, scientists have come to the conclusion that the body’s microbiome is of critical importance to overall health, disease prevention, and even in managing mental health.

Hosting very complex and varied colonies of bacteria in the stomach and digestive track, the gut microbiome can be severely hampered by the consumption of foods which feed disagreeable bacteria. At the top of this list is sugar, which is a major component of alcoholic beverages. People don’t typically think about how much sugar they are consuming when they go out drinking, but quitting alcohol can offer a significant opportunity to bring these colonies back into balance.

Digestive health is another area of health that is really being understood as an indicator of potential future disease. Furthermore, we are seeing an epidemic of gastrointestinal issues such as acid reflux, gastritis or inflammation of the stomach. Caring for the GI tract is more important than ever, but regular alcohol consumption may be one of the greatest stressors to your digestive system.

“The digestive system works hard to eliminate alcohol (a toxin) from our system. So when we cut out alcohol we are allowing the digestive system to better convert the food and beverages we consume into fuel, energy for us to function optimally.” ~Niket Sonpal, an adjunct assistant professor of clinical medicine at Touro College of Osteopathic Medicine

4.) You May Sleep Better

Many people have the misconception that a drink, or ‘night cap,’ will help them to sleep better, when actually the opposite is true. Alcohol can have an almost immediate relaxing effect on the body and mind, but once it begins to be broken down in the digestive system and sent to the liver, it creates a

The body does not sleep well after consuming even a small amount of alcohol. In fact, as noted by the National Sleep Foundation, alcohol disrupts sleep by blocking REM deep sleep patterns, it can aggravate breathing problems, lead to more bathroom trips, and severely disrupt circadian rhythms.

Even small or moderate amounts of alcohol can have a sever impact on sleep, but quitting alcohol can quickly help to restore healthy sleep patterns.

5.) Your Skin Will Clear Up

Alcohol is known toxin that kills living cells, which is why it is used as a disinfectant and preservative.  And acting as a diuretic, once inside the body, it can cause moderate, even severe dehydration, which has a litany of negative effects on the body, not the least of which is the clarity and quality of your skin.

Being dehydrated can cause blotchy skin, and alcoholics commonly have blotchy, red-ish skin. For many drinkers, heavy consumption can aggravate rosacea and what has been known as ‘drinker’s nose,’ as it affects how the body circulates blood.

“Alcohol aggravates symptoms of rosacea because drinking enlarges the body’s blood vessels. When the blood vessels are more open, they allow more blood to flow to the surface of the skin, creating a flushed look that is typically referred to as the ‘alcohol flush.’ The redness can spread anywhere on the body but is most noticeable on the face, shoulders, and chest. For those already suffering from redness due to rosacea, alcohol can make this symptom increasingly worse.” [Source]

6. Your Brain Will Perform Better

It’s no secret that being drunk can be like a mental disability as people lose motor control and their ability to walk and talk deteriorates, vision is blurred and memory fails. But while this effect dissipates as one sober’s up or sleeps it off the effect alcohol has on your brain is significant. A recent study tried to determine what the long-term physical effects of regular alcohol consumption have on the brain, finding that the hippocampus was seriously hampered.

“The study followed 550 men and women for 30 years, measuring their brain structure and function to determine how alcohol use affects the mind over time. What they found is that the more people drank, the more atrophy occurred in the brain’s hippocampus, a seahorse-shaped structure in your brain that plays a role in storing memories. The highest risk was for people who drank 17 standard drinks or more of alcohol per week. But even people who drank moderately saw an elevated risk for cognitive changes.” [Source]

7.) It Can Help You Lose Weight

In the midst of a national epidemic of diabetes and obesity, it’s important to maintain healthy body weight. alcohol is one of the biggest sources of calories and sugar there is, but most people don’t realize how fast calories from beer, wine, and mixed drinks can add up. Since alcohol metabolizes as a fat, it’s almost like double whammy where without even thinking about it you are increasing your sugar/calorie intake, and producing more fat.

Furthermore, making the decision to quit drinking is a signal to the body and spirit that you are determined to make better health choices overall, which can have a serious multiplier effect on your body’s health.

The following infographic sheds more light on what actually happens to your body as you consume alcohol.

You have to wonder how we ended up in a society that promotes heavy consumption of alcohol as a social norm and veritable right of passage, and at the same time the possession or consumption of the plant cannabis which is known to have many positive health benefits. Quitting alcohol is a great way to take control over your health.

Sofia Adamson is a contributing writer for Waking Times with a keen appreciation for matters of science and the spirit.