The public and private turmoil of escaping a suspected sex cult 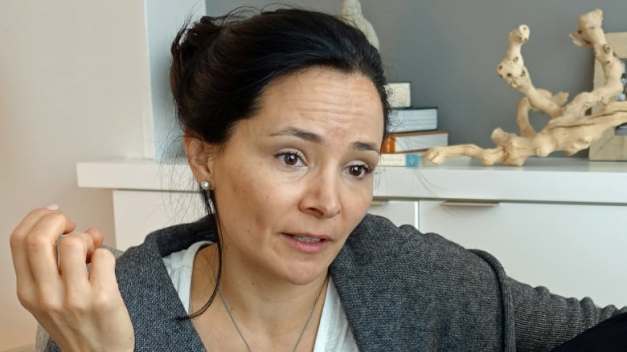 In the CBC podcast series Escaping NXIVM, Vancouver’s Sarah Edmondson shares her experience of leaving a self-help community that she now says is a cult. (Kathleen Goldhar/CBC)

NXIVM calls itself a humanitarian community. Experts and critics call it a cult. Uncover: Escaping NXIVM is a CBC investigative podcast series about the group, its leader, Keith Raniere, and one woman’s journey to get out. Read about whistleblower Sarah Edmondson’s experience “deprogramming” after 12 years in the group.

When Sarah Edmondson first joined the self-help organization NXIVM, it seemed inspiring, communal and full of exciting epiphanies. But her awakening and escape 12 years later was frightening, embarrassing and full of devastating truths.

The Vancouver actor says she felt confused and ashamed that she could have missed — or dismissed — so many red flags about the group’s cult-like traits, all of which seem so obvious now.

“I have really good days, and then I have really bad days. And the bad days are … very dark,” she said in an interview back in September 2017, just three months after quitting the Albany, N.Y.-based organization.

NXIVM was founded by Keith Raniere, a 58-year-old man who insists his followers call him Vanguard. He claims to be one of the smartest people in the world, and that his personal development training system can unlock anybody’s potential.

Those were followed by a slew of racketeering conspiracy charges against Raniere and key members of his inner circle three months later.

Raniere is accused of being at the top of a cult-like scheme designed to recruit women so they could be controlled, extorted and coerced into having sex with him. He has pleaded not guilty to all the charges.

End of the illusion

NXIVM, which has suspended its operations, is structured like a multi-level marketing business. Its members are responsible for recruiting new members and convincing them to shell out thousands of dollars for Raniere’s personal development training. Edmondson excelled at this.

She started to strongly suspect she was in trouble in early 2017, after joining what she was told was a secret women’s sorority linked to NXIVM — a sort of “Freemasons for women” called DOS. She says her best friend and recruiter told her a group of women had united to help each other reach their goals.

As a result of years of NXIVM training, Edmondson was quite willing to engage in unconventional behaviour in the name of her personal development, she says. But DOS was different. It was extreme.

To seize this particular opportunity to better herself, Edmondson had to agree to be her best friend’s “slave” and provide her with “collateral” — material that could be used to ruin Edmondson’s life if she were ever to leave DOS or speak of it with outsiders. Edmondson provided a nude picture of herself and bogus recorded confessions about her family.

Despite her escalating concern about DOS, Edmondson attended an initiation ceremony at a private home just outside Albany in March 2017. She let a doctor sear a strange symbol on her pelvis with a cauterizing pen while four naked pledges held her down.

Edmondson’s disturbing suspicions were confirmed once and for all two months later, when she realized her scar, which was supposed to represent the four elements, actually contained Raniere’s initials.

She knew she needed to get out. The only question was how?

Go quietly and try to forget what happened?

Or blow the whistle and try to bring the whole thing down?

Many people had left NXIVM over the years without creating a stir. Some moved away. Others went off to start families. And many simply decided they couldn’t afford the training anymore. It was never a big deal — provided they didn’t make it one.

Edmondson, 41, had seen what happens to critics and former members who dared to speak out about the organization’s cult-like tendencies.

“They don’t care to win lawsuits,” Edmondson said of NXIVM. “They care to drain and destroy people.”

Financial adviser Barbara Bouchey found herself buried in lawsuits and legal fees after she broke up with Keith Raniere and later left his self-help business, NXIVM. (Barbara Bouchey)

Barbara Bouchey, a former NXIVM board member, says she’s one of those people.

A successful financial planner, Bouchey was in a relationship with Raniere for years before she split with him in 2008, and with NXIVM the following year. The organization responded with a barrage of legal action.

Bouchey was a defendant or witness in more than a dozen lawsuits, including several launched by Clare and Sara Bronfman, heiresses to the Seagram’s liquor fortune and powerful Raniere devotees.

Bouchey says she was buried in legal fees and was forced to seek bankruptcy protection.

“People don’t even know how I’m still standing,” she said.

In July, three months after Raniere’s arrest, Clare Bronfman, 39, was charged with racketeering conspiracy and conspiracy to commit identity theft for her role in Raniere’s inner circle, which prosecutors describe as an “organized criminal enterprise.”

One way that enterprise was protected, the indictment says, was through harassment, coercion and abusive litigation to attack perceived enemies and critics.”

Bronfman has pleaded not guilty to the charges.

‘I have to expose this’

Despite the risk of retaliation, Edmondson decided blowing the whistle was the only responsible choice. She had three “slaves” of her own in DOS and had brought many people into the NXIVM fold over the years.

So, on Oct. 17, 2017, four months after quitting the group, she appeared on the front page of the New York Times.

She revealed the inner workings of DOS, including its “master/slave” hierarchy and collection of potential blackmail materials. The piece also included a photograph of the blotchy scar on her pelvis.

“I became — a ‘vigilante’ is not the right word, but that’s the feeling I have when I think of myself back then,” she said in an interview in February. “I was like, ‘I have to expose this. I have to bring it to light.'”

Actor Allison Mack, who co-starred in the television show Smallville, leaves court in New York after a bail hearing on April 24, 2018. She was released on bail set at $5 million. Mack has pleaded not guilty to all the charges against her, including sex trafficking and conspiracy to commit forced labour, for her alleged role as a member of Raniere’s inner circle. (Drew Angerer/Getty Images)

Following Raniere’s arrest, Clare Bronfman issued a statement that didn’t identify anybody specifically, but said: “There have been many defamatory accusations made and I have taken them seriously.”

In a separate statement, NXIVM said the Times story “unfoundedly, and incorrectly” linked NXIVM with a “social group,” and warned: “We will explore any and all legal remedies to correct these lies.”

Edmondson said she knows she did the right thing, and she’s confident she will be OK.

Disentangling herself from NXIVM in such a public way was scary, especially since she was still struggling to sort out her experience in her own mind — or “deprogram,” as the process is often called.

Psychotherapist Daniel Shaw, who has treated many former cult members, says there’s no single strategy to help someone adjust to their new reality, because people react in so many different ways.

Some try to sweep it all under the rug and convince themselves it wasn’t a big deal. Others feel so betrayed they become dysfunctional and can’t maintain relationships. And some are so consumed with anger they become manic in their desire to bring down the leader.

“Essentially, what people suffer when they leave these groups is post-traumatic stress, and often it’s very challenging for them to recognize that they’re traumatized,” he said.

Sarah faces criticism about her role in NXIVM and tries to come to terms with the 12 years she spent as a high-level member of the group. 43:42

On top of that, he said, they’re facing a world that really has no way of understanding what they’ve been through “and often judges and looks down” on them.

In Edmondson’s case, the Times article increased the pool of judges dramatically.

She was concerned for her recruits who were still involved, she said.

And she was ashamed of how she’d treated those who resisted her recruitment pitch or were critical of NXIVM in the past.

“Part of my deprogramming has been a lot of apologies,” she said.

Edmondson admits she was dismissive of outsiders.

“I felt like I had a secret,” she said of her experience in NXIVM. “I was part of a secret group that knew things that other people didn’t, and if you didn’t want to be a part of that, then … you know, go about your life, but I’m not really interested in you.”

This attitude even created a distance between Edmondson and her mother, who had serious concerns about NXIVM but knew if she pushed her daughter too hard on the issue, she’d cut her out of her life.

Edmondson realizes she wasn’t there for her mother when her health took a turn for the worse. In fact, she “chose to be cold with her,” she said.

That behaviour, she thinks, was partly due to her training, which included a concept called parasites, which basically suggests people use sickness as a way to get attention.

“So my mom’s sicknesses really should’ve been a wake-up call for me to be there for her,” she said. “But in essence, because of what I was being taught, pushed me away from her.”

When Edmondson told her mother she was leaving NXIVM, there were no “I told you so”s. No harsh words for the pain she’d caused. Her mother simply held her hand and was there for her.

When she was part of the organization, Edmondson thought she was finding her voice. In hindsight, she believes her voice was being stripped away from her slowly, “like the frog in the pot of boiling water,” she said.

“And she just stood by watching and waiting for me to wake up.”