New York Governor Andrew Cuomo found himself in hot water after claiming that President Trump’s “Make America Great Again” slogan is inaccurate because it implies that America was great to start with.

“We’re not going to make America great again; it was never that great,” Cuomo contemptuously remarked.

Wanting to know what young Americans thought of these comments, I went to Washington Square Park in New York City to talk with Governor Cuomo’s constituents about those comments. 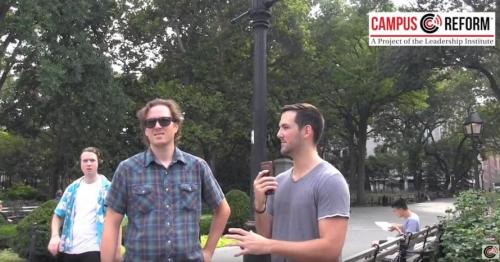 When asked if there was ever a time in America’s history when we were great, the majority of the people I spoke with made it clear: they were siding with Governor Cuomo.

“I don’t believe America has been great for all folks, ever. Even today,” said one respondent, while another added simply, “I would have to agree with Governor Cuomo.”

One person elaborated on their reasoning for saying America was never great, saying,

“The idea that there was this once great America is pointing towards this false sense of nationalism…What, it’s talking about white America? Yeah, it’s not great.”

“America has been great… for straight white men.”

Wondering if this thought process stemmed from what was being taught in the classroom, I followed up by asking if they’d ever been taught American Exceptionalism in school.

Just one person said it was a concept they’d been taught in class.

“I’ve never heard of it before,” conceded one, while another explained that “I personally wasn’t taught American Exceptionalism because I went to a very forward thinking liberal school…”

What else did they have to say? Did anyone say America is great? Watch the full video to find out!