Tubularsock is having a little bit of trouble with this Putin-Trump-Thingee.

Now what does it tell you that Donnie and Vlad met in “secret” under “rib vaults, and flying buttresses” in The Presidential Palace’s Gothic Hall in Helsinki?

Followed by a wider working lunch in The Hall of Mirrors.

Think on this, just a moment.

The Gothic part may show that Putin has been influenced more than we have been led to believe by Pussy Riot, the feminist Russian punk-rock collective based in Moscow.

Pussy Riot may seem a little Goth at times to Vlad and Donnie’s proclivity toward grabbing pussy makes it a great reminder of the “pee-pee-tape” so as not to have to remind Donnie of Vlad’s influence. Always best unsaid though loud and clear.

And then of course ………. The Hall of Mirrors.

NOW THAT TELLS US EVERYTHING!

On the one hand there is the problem that meddling in our elections is something new and our moral high ground on this activity is ludicrous. Like we have never done this constantly to nearly every country on the globe. What was the CIA created to do anyway?

So lets get this straight, once again.

Killery DID NOT lose the election because of Russian meddling!

Killary lost the election because she IS/WAS a lying, conniving, corrupted corporate-Democrap bitch!

And the American public knew it.

Can we lay that to rest now?

And hasn’t it been convenient that Killery’s total corrupt rigging of the Democrap primary edging Bernie out has all but disappeared. EVEN BY FUCKING BERNIE!

Talking about collusion ……. fuck Bernie too!

On the other hand …….. that fucking pee-tape must be one hell of a show! There is no doubt that Vlad has got Dump by the balls! Wow, that is gross just thinking about this! 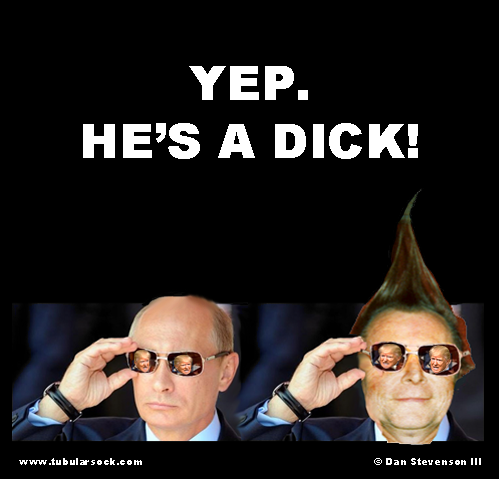 And then third …….. Tubularsock is in favor of working with the Russians and ending this neo-con cold war bull shit.

Remember back in 2009 Step-en-fetch-it-Obummer and Killery-of-state wanted to “reset” U.S. relations with Russia. So why all this backlash when Dump is going after it?

The U.S. might try something new this century and get along with others rather than attempting to control others. Tubularsock knows how unreasonable this seem to the rabid and stupid deplorables but they seem to love their Imbecile-In-Chief and with his love fest with Vlad we might get peace in our time.

Oh sure, if it all goes well Dump with get brand new hotels in Moscow AND Vladivostok and the rest of us will get sauerkraut for dinner.

Hell …… that is pretty good faire for peasants!