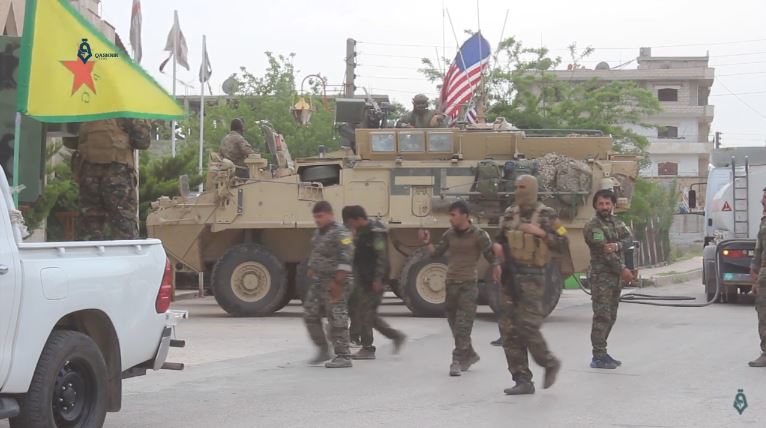 Ask yourself why is the USA in Syria, a nation that does not threaten it whatsoever. No one invited the US, but yet here they are. U.S. armored vehicle in Al-Hasakah, northeastern Syria, May 2017

http://www.blacklistednews.com
April 12, 2018
Outgoing CIA Director Mike Pompeo revealed the US had already killed hundreds of Russians in Syria, likely Russian mercenaries working with the Assad government, back in February.

“In Syria, a handful of weeks ago, the Russians met their match and a couple hundred Russians were killed,” Pompeo said during a Senate hearing on his nomination to become US secretary of state.

During the Feb. battle, US-led coalition forces working with the Kurdish militia attacked Syrian military assets by air, but the number of casualties – and their nationalities – were suppressed until now.

The Russian mercenaries were likely part of the “Wagner Group,” a private army that operates with implied consent from Moscow.

Russia has spent the past several years fighting ISIS in Syria.

Plus they’ll likely fuel controversy over the fact that an official striving to become the country’s top diplomat would claim that hundreds of dead Russians had “met their match.”

Meanwhile, President Trump has backed off from the intense rhetoric he directed at Russia on Wednesday when he tweeted that missiles aimed at Syria were “coming.”

It’s quite possible that the president is finally listening to his critics about the disastrous consequences that would spill over from another war in the Middle East.

Additionally, Secretary of Defense James Mattis pointed out the US doesn’t have evidence that Syria carried out a chemical attack in its own territory earlier this week.

Previous chemical attacks were blamed on the White Helmets, an anti-Assad group once publicly praised by globalist billionaire George Soros.