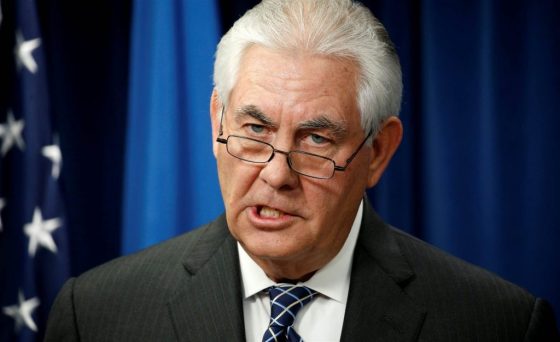 There was a 20-nation security meeting in Vancouver on Tuesday, 1/15/18, and the nations in attendance agreed to impose stronger sanctions against North Korea in a bid to stop their nuclear weapons buildup and tests. China and Russia did not attend, and stated the meeting was evidence of another Cold War forming. The most alarming rhetoric, however, emanated from the U.S. Secretary of State Tillerson, who flat out stated that if the North Koreans do not negotiate, it will bring about a military response. Here is the video clip and an excerpt heading as released by Reuters on 1/17/18, entitled US Warns Pyongyang on Military Option:

As headlines run, there is nothing that “jumps out” with this one, until you delve into the substance of it. This is very serious, as the U.S. has been narrowing the cone of the funnel toward war, now, for several months…a quiet escalation in the form of movements of military assets into the area, military exercises (designed to provoke North Korea), and steadily-increasing sanctions.

Akin to an Anglo-Centric schoolyard, the Vancouver Summit was a “closed” meeting of nations with stances determined prior to the meeting. The U.S., Canada, Britain, and Australia…and the “English-speaking kids,” only invited nations that either fought in the Korean War or nations that would abide by the program…nations that would not present dissenting views.

Russia and China were not invited: go figure.

Another headline sums it up most eloquently as released by CBC News. The article is entitled, North Korea Summit in Vancouver to focus on enforcing sanctions ahead of diplomacy.

How do you like that one? “Focus on enforcing sanctions ahead of diplomacy.”

The imposition of sanctions prior to diplomatic discourse is extortion: nothing less.

Here’s another statement from Tillerson on 1/16:

“We cannot and will not accept DPRK as a nuclear state.”

Big news, Rex: North Korea already is a nuclear state. If they were not? Jaime Dimon would be the North Korean “Czar,” heading a round-table discussion group on how many McDonald’s and Wal-Mart’s were to be “emplaced” in North Korea, Un would be dead, and the IMF would be sending in an army of accountants and other vampires under UN protection…to parcel off all North Korea’s natural resources…as “caretakers” for the North Korean people’s benefit.

Bigger news, Rex: Russia and China will not permit it, as any such in-roads at “transforming North Korea into a democratic member of the family of nations” …translation: [making North Korea another IMF and Rothschild vassal enslaved under the guise of democracy] would cut into their sphere of influence.

Some have analyzed this as an attempt by Tillerson to shore up his position in the White House, but that doesn’t hold water, because it benefits the administration to make it seem as if diplomatic options are being offered before an attack by the U.S.  It’s a “CYA” policy by the U.S. administration, and Tillerson still takes the fall if anything goes wrong.

Just within the past week, we have seen one false alarm (intentional or accidental?) missile alert in Hawaii, and another one in Japan. The “predictive programming” paradigm holds, and war is always the answer to bolster a politician’s position. Schachtner just won a state seat in Wisconsin’s senate that had been Republican-held for 17 years, and Doug Jones recently defeated Roy Moore in Alabama. The midterms are not even here yet.

A sitting U.S. Secretary of State…the head diplomat of the U.S., mind you…has just announced that if North Korea does not negotiate, that a military response will occur. Not one attempt has been made by Tillerson (or the State Department, for that matter) to initiate face-to-face dialogue and relegate arrogant imperialistic hubris to where it belongs…in the basement. Millions of lives are at stake that are not considered important. What takes center stage is the pride of a narcissistic handful in the administration. Truly, the Empire is at an end. A sitting U.S. Secretary of State…the head U.S. diplomat…resorts to the pandering of extortion to force diplomats from North Korea to bargain.