How the heroin trade explains the US-UK failure in Afghanistan 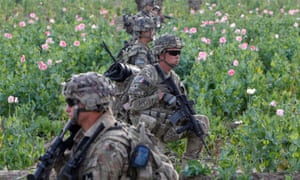 After fighting the longest war in its history, the US stands at the brink of defeat in Afghanistan. How could this be possible? How could the world’s sole superpower have battled continuously for more than 16 years – deploying more than 100,000 troops at the conflict’s peak, sacrificing the lives of nearly 2,300 soldiers, spending more than $1tn (£740bn) on its military operations, lavishing a record $100bn more on “nation-building”, helping fund and train an army of 350,000 Afghan allies – and still not be able to pacify one of the world’s most impoverished nations? So dismal is the prospect of stability in Afghanistan that, in 2016, the Obama White House cancelled a planned withdrawal of its forces, ordering more than 8,000 troops to remain in the country indefinitely.

In the American failure lies a paradox: Washington’s massive military juggernaut has been stopped in its steel tracks by a small pink flower – the opium poppy. Throughout its three decades in Afghanistan, Washington’s military operations have succeeded only when they fit reasonably comfortably into central Asia’s illicit traffic in opium – and suffered when they failed to complement it.

It was during the cold war that the US first intervened in Afghanistan, backing Muslim militants who were fighting to expel the Soviet Red Army. In December 1979, the Soviets occupied Kabul in order to shore up their failing client regime; Washington, still wounded by the fall of Saigon four years earlier, decided to give Moscow its “own Vietnam” by backing the Islamic resistance. For the next 10 years, the CIA would provide the mujahideen guerrillas with an estimated $3bn in arms. These funds, along with an expanding opium harvest, would sustain the Afghan resistance for the decade it would take to force a Soviet withdrawal. One reason the US strategy succeeded was that the surrogate war launched by the CIA did not disrupt the way its Afghan allies used the country’s swelling drug traffic to sustain their decade-long struggle.

Despite almost continuous combat since the invasion of October 2001, pacification efforts have failed to curtail the Taliban insurgency, largely because the US simply could not control the swelling surplus from the country’s heroin trade. Its opium production surged from around 180 tonnes in 2001 to more than 3,000 tonnes a year after the invasion, and to more than 8,000 by 2007. Every spring, the opium harvest fills the Taliban’s coffers once again, funding wages for a new crop of guerrilla fighters.

At each stage in its tragic, tumultuous history over the past 40 years – the covert war of the 1980s, the civil war of the 90s and its post-2001 occupation – opium has played a central role in shaping the country’s destiny. In one of history’s bitter ironies, Afghanistan’s unique ecology converged with American military technology to transform this remote, landlocked nation into the world’s first true narco-state – a country where illicit drugs dominate the economy, define political choices and determine the fate of foreign interventions.

During the 1980s, the CIA’s secret war against the Soviet occupation of Afghanistan helped transform the Afghani-Pakistani borderlands into a launchpad for the global heroin trade. “In the tribal area,” the US state department reported in 1986, “there is no police force. There are no courts. There is no taxation. No weapon is illegal … Hashish and opium are often on display.” By then, the process of guerrilla mobilisation to fight the Soviet occupation was long under way. Instead of forming its own coalition of resistance leaders, the CIA had relied on Pakistan’s powerful Inter-Services Intelligence agency (ISI) and its Afghan clients, who soon became key players in the burgeoning cross-border opium traffic.

The CIA looked the other way while Afghanistan’s opium production grew from about 100 tonnes annually in the 1970s to 2,000 tonnes by 1991. In 1979 and 1980, just as the CIA effort was beginning to ramp up, a network of heroin laboratories opened along the Afghan-Pakistan frontier. That region soon became the world’s largest heroin producer. By 1984, it supplied a staggering 60% of the US market and 80% of the European. Inside Pakistan, the number of heroin addicts surged from near zero (yes, zero) in 1979 to 5,000 in 1980, and 1.3 million by 1985 – a rate of addiction so high the UN termed it “particularly shocking”.

According to a 1986 state department report, opium “is an ideal crop in a war-torn country since it requires little capital investment, is fast growing and is easily transported and traded”. Moreover, Afghanistan’s climate was well suited to growing poppies. As relentless warfare between CIA and Soviet surrogates took its toll, Afghan farmers began to turn to opium “in desperation”, since it produced “high profits” that could cover rising food prices. At the same time, the state department reported that resistance elements took up opium production and trafficking “to provide staples for [the] population under their control and to fund weapons purchases”.

As the mujahideen guerrillas gained ground against the Soviet occupation and began to create liberated zones inside Afghanistan in the early 1980s, the resistance helped fund its operations by collecting taxes from peasants who grew the lucrative opium poppies, particularly in the fertile Helmand valley. Caravans carrying CIA arms into that region for the resistance often returned to Pakistan loaded down with opium – sometimes, reported the New York Times, “with the assent of Pakistani or American intelligence officers who supported the resistance”.

Charles Cogan, a former director of the CIA’s Afghan operation, later spoke frankly about the agency’s choices. “Our main mission was to do as much damage as possible to the Soviets,” he told an interviewer in 1995. “We didn’t really have the resources or the time to devote to an investigation of the drug trade. I don’t think that we need to apologise for this … There was fallout in term of drugs, yes. But the main objective was accomplished. The Soviets left Afghanistan.”

Over the longer term, the US intervention produced a black hole of geopolitical instability that would never again be sealed or healed. Afghanistan could not readily recover from the unprecedented devastation it suffered in the years of the first American intervention. As the Soviet-Afghan war wound down between 1989 and 1992, the Washington-led alliance essentially abandoned the country, failing either to sponsor a peace settlement or finance reconstruction.

While Washington turned away from Afghanistan to other foreign policy hotspots in Africa and the Persian Gulf, a vicious civil war broke out in a country that had already suffered, between 1979 and 1989, some 1.5 million dead, about 10% of the country’s population. During the years of civil strife among the many well-armed warlords the CIA had left primed to fight for power, Afghan farmers raised the only crop that ensured instant profits: the opium poppy. Having multiplied twentyfold during the covert-war era of the 1980s, the opium harvest would more than double again during the civil war of the 1990s.

In this period of turmoil, opium’s ascent is best understood as a response to severe damage from two decades of destructive warfare. With the return of some three million refugees to a war-ravaged land, the opium fields were an employment godsend, requiring nine times as many labourers to cultivate as wheat, the country’s traditional staple. In addition, only opium merchants were capable of accumulating capital rapidly enough to be able to provide poor poppy farmers with much-needed cash advances, which often provided more than half their annual income. That credit would prove critical to the survival of many impoverished villagers.

In the civil war’s first phase, from 1992 to 1994, ruthless local warlords combined arms and opium in a countrywide struggle for power. Later, Pakistan threw its backing behind a newly arisen Pashtun force, the Taliban. After seizing Kabul in 1996 and taking control of much of the country, the Taliban regime encouraged local opium cultivation, offering government protection to the export trade and collecting much-needed taxes on both the opium harvested and the heroin manufactured. UN opium surveys showed that, during the Taliban’s first three years in power, Afghanistan’s opium crop accounted for 75% of world production.

In July 2000, however, as a devastating drought entered its second year and hunger spread across Afghanistan, the Taliban government suddenly ordered a ban on all opium cultivation, in an apparent appeal for international acceptance. A subsequent UN crop survey of 10,030 villages found that this prohibition had reduced the harvest by 94%.

Three months later, in September 2000, the Taliban sent a delegation to UN headquarters in New York to trade upon the country’s continuing drug prohibition in a bid for diplomatic recognition. Instead, the UN imposed new sanctions on the regime for protecting Osama bin Laden. The US, on the other hand, actually rewarded the Taliban with $43m in humanitarian aid, even as it seconded UN criticism over Bin Laden. Announcing this aid in May 2001, secretary of state Colin Powell praised “the ban on poppy cultivation, a decision by the Taliban that we welcome”, but still urged the regime to end “their support for terrorism; their violation of internationally recognised human rights standards, especially their treatment of women and girls”.

After largely ignoring Afghanistan for a decade, Washington “rediscovered” the country in the aftermath of the 9/11 terrorist attacks. In October 2001, the US began bombing the country, and then, with the support of British forces, launched an invasion spearheaded by local warlords. The Taliban regime collapsed with a speed that surprised many government officials. In retrospect, it seems likely that its opium prohibition was a crucial factor.

To an extent not generally appreciated, Afghanistan had, for two full decades, devoted a growing share of its resources – capital, land, water and labour – to the production of opium and heroin. By the time the Taliban banned cultivation, its agriculture had become little more than an opium monocrop. The drug trade accounted for most of its tax revenues, much of its export income, and a significant share of its employment.

The Taliban’s sudden opium eradication proved to be an act of economic suicide that brought an already weakened society to the brink of collapse. A 2001 UN survey found that the ban had “resulted in a severe loss of income for an estimated 3.3 million people”, about 15% of the population. In this context, it became, according to the UN, “easier for western military forces to persuade rural elites and the population to rebel against the regime”.