UK: How the aristocracy preserved their power

Why do the citizens of the UK accept this bunch of scoundrels and parasites as their so-called leaders is beyond anybody’s guesses. Stupidity? Mind control? What the hell are you doing UK? Rid yourselves of these parasites. Start with the biggest welfare queen around: the Queen and her parasitic family! Deluded eejits. 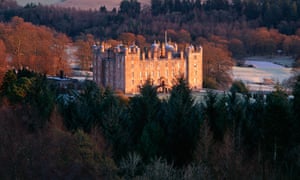 “Aristocrats may not like paying tax, but they don’t object to taking handouts from the taxpayer. The landed aristocracy has benefited to an extraordinary degree from payments under the EU’s common agricultural policy. The figures are staggering. At least one in five of the UK’s top 100 single-payment recipients in 2015/16 was aristocratic.”

Source: How the aristocracy preserved their power | News | The Guardian

After democracy finally shunted aside hereditary lords, they found new means to protect their extravagant riches. For all the modern tales of noble poverty and leaking ancestral homes, their private wealth and influence remain phenomenal

On 11 January this year, Charlie, the genial 3rd Baron Lyell, died aged 77 in Dundee after a short illness. He had inherited his title and the 10,000-acre Kinnordy estate, in Angus, when he was just four years old. After Eton, Christ Church and the Scots Guards, he spent nearly 47 years in the Lords, serving as a Conservative minister from 1979 to 1989. He never married and his title died with him, but under the byzantine rules drawn up when the majority of hereditary peers were excluded from the Lords in 1999, his seat was contested in a byelection in which 27 hereditary peers stood.

In the short statement required of them, most of the candidates emphasized their career and credentials, but Hugh Crossley, the 45-year-old 4th Baron Somerleyton, went straight for the ideological jugular: “I think the hereditary peerage worth preserving and its principle creates a sense of innate commitment to the welfare of the nation,” he wrote.

It is not difficult to understand why Crossley would think that way. He was born in, owns, lives in and runs Somerleyton Hall near Lowestoft, Suffolk, which was bought by his carpet-manufacturer ancestor Sir Francis Crossley in 1863. It is palatial, with elaborate Italianate features, a maze, an aviary, a pergola 300ft long, a marina, a 12-acre garden and a 5,000-acre estate. His own publicity material claims that “a trip to Somerleyton is an experience of historical opulence”. Of course he believes in the hereditary principle and his own entitlement.

For most of the 20th century, the aristocracy showed itself remarkably indifferent to the welfare of the nation, if attendance in the upper house is any indication. Debates in the Lords were cursory and poorly attended. Peers had a short week – rarely sitting on a Monday or Friday – and short days, starting at 3.45pm or 4.15pm. During the second world war, there were rarely more than two dozen peers in attendance, and in the postwar years the trend was accentuated. The tedious business of daily attendance no longer interested their lordships, but when their personal interest was at stake or their hackles were raised, they would turn up in force. This became evident in 1956 when the Commons carried a private member’s bill to abolish the death penalty and the Lords voted it down by a resounding 238 votes to 95.

Today, of course, we are accustomed to thinking of Britain’s aristocracy as a quaint historical curiosity. Under Tony Blair’s first government, most hereditary peers were removed from the Lords. Some might think this a fall from grace, but the very fact that 92 hereditaries were to remain (a larger number than had attended most debates over the previous eight decades) was a victory that proved their enduring strength. They had not just delayed but prevented democratic reform of the Lords, and they had entrenched their reactionary presence.

By the 1990s, politics had become a minority interest for the aristocracy, yet for those who chose to exercise their parliamentary rights, the Lords gave them safe passage into government. John Major appointed a string of hereditary peers to his government. The leader of the House of Lords was Viscount Cranborne, heir to the 6th Marquess of Salisbury, and among the ministers were seven earls, four viscounts and five hereditary barons. Even the administration formed by Theresa May in June 2017 included one earl, one viscount and three hereditary barons.

Behind the beauty of the British aristocracy’s stately homes and the sometimes romantic and eventful lives they led, lies a darker story: a legacy of theft, violence and unrepentant greed.

Historically, the British aristocracy’s defining feature was not a noble aspiration to serve the common weal but a desperate desire for self-advancement. They stole land under the pretence of piety in the early middle ages, they seized it by conquest, they expropriated it from the monasteries and they enclosed it for their private use under the pretence of efficiency. They grasped wealth, corruptly carved out their niche at the pinnacle of society and held on to it with a vice-like grip. They endlessly reinforced their own status and enforced deference on others through ostentatiously exorbitant expenditure on palaces, clothing and jewellery. They laid down a strict set of rules for the rest of society, but lived by a different standard.

Such was their sense of entitlement that they believed – and persuaded others to believe – that a hierarchical society with them placed firmly and unassailably at the top was the natural order of things. Even to suggest otherwise, they implied, was to shake the foundations of morality.

They were shocked and angered when others sought to deprive or degrade them. They clung tenaciously to their position. They developed ever more specious arguments to defend their privileges. They eulogised themselves and built great temples to their greatness. They jealously guarded access to their hallowed halls. And when democracy finally and rudely shunted them aside, they found new means of preserving their extravagant riches without the tedium of pretending they sought the common interest. Far from dying away, they remain very much alive.

For all the tales of noble poverty and leaking ancestral homes, the private wealth of Britain’s aristocracy remains phenomenal. According to a 2010 report for Country Life, a third of Britain’s land still belongs to the aristocracy. Notwithstanding the extinction of some titles and the sales of land early in the 20th century, the lists of major aristocratic landowners in 1872 and in 2001 remain remarkably similar. Some of the oldest families have survived in the rudest financial health. In one analysis, the aristocratic descendants of the Plantagenet kings were worth £4bn in 2001, owning 700,000 acres, and 42 of them were members of the Lords up to 1999, including the dukes of Northumberland, Bedford, Beaufort and Norfolk.

The figures for Scotland are even more striking. Nearly half the land is in the hands of 432 private individuals and companies. More than a quarter of all Scottish estates of more than 5,000 acres are held by a list of aristocratic families. In total they hold some 2.24m acres, largely in the Lowlands.

Many noble landholdings are among the most prestigious and valuable in the world. In addition to his 96,000-acre Reay Forest, the 23,500-acre Abbeystead estate in Lancashire and the 11,500-acre Eaton estate in Cheshire, the Duke of Westminster owns large chunks of Mayfair and Belgravia in London. Earl Cadogan owns parts of Cadogan Square, Sloane Street and the Kings Road, the Marquess of Northampton owns 260 acres in Clerkenwell and Canonbury, and the Baroness Howard de Walden holds most of Harley Street and Marylebone High Street. These holdings attract some of the highest rental values in the world. Little has changed since 1925, when the journalist WB Northrop published a postcard portraying the octopus of “landlordism” with its tentacles spread across London, charging the aristocracy with pauperising the peasantry, paralysing the building trade and sucking the lifeblood of the people.

One legal provision unique to England and Wales has been of particular importance to these aristocratic landlords: over the centuries they built many millions of houses, mansion blocks and flats, which they sold on a leasehold rather than freehold basis. This meant that purchasers are not buying the property outright, but merely a time-limited interest in it, so even the “owners” of multimillion-pound residences have to pay ground rent to the owner of the freehold, to whom the property reverts when their leases (which in some areas of central London are for no more than 35 years) run out. This is unearned income par excellence.

Built property aside, land ownership itself is still the source of exorbitant wealth, as agricultural land has increased in value. According to the 2016 Sunday Times Rich List, 30 peers are each worth £100m or more.

Many aspects of those peers’ lives have barely changed over the centuries. Edward William Fitzalan-Howard, the 18th Duke of Norfolk, is still the premier duke of England, as well as being the Earl Marshal, the Hereditary Marshal of England, a member of the Lords and the holder of nine other titles. His landholdings are obscure, but, as he (under-)stated in his maiden (and only) speech in the Lords: “I farm in West Sussex and own moorland in North Yorkshire”, and he still lives at Arundel Castle. Many of those who have ceded their homes to the National Trust or to a charitable trust of their own devising (with all the concomitant tax advantages) still occupy their ancestral pads, with the added benefit of modern plumbing and wiring. The Dowager Countess of Cawdor still lives in her son’s castle thanks to a tax exemption, the Marquess of Curzon still lives and shoots at Kedleston, Derbyshire, thanks to the National Heritage Memorial Fund (NHMF), and the Duke of Marlborough still dines in the saloon at Blenheim, which charges a £24.90-a-head entry fee for visitors.

How the aristocracy preserved their power | News | The Guardian