© Low Frequency Hum Sufferers/Facebook
People around the world say they are hearing a mysterious drone that has been dubbed The World Hum.

Glen MacPherson first heard the Hum in 2012. He was in Sechelt when he detected a low-level drone that he thought was coming from nearby float planes. Over time, he started to realize the Hum had nothing to do with planes and tried to figure out what exactly was going on. So, he did what most people do when they have an unanswered question: he Googled it.

He found out he wasn’t alone. MacPherson discovered an online community of people who say they have been hearing a mysterious drone that has been dubbed The World Hum.

“Much to my surprise, it turns out I was one of the people who can sense what seems to be a very unusual low-frequency sound,” he said.

Four years later, when curious people like MacPherson Google information about the Hum, they come across his website, The World Hum Map and Database.

MacPherson, a schoolteacher in Gibsons who has also worked as an instructor at the University of British Columbia, says he wanted to apply a measure of scientific rigour to this unexplained phenomenon, so he created the database to track reports from people around the world who say they too hear the Hum.

MacPherson has heard from thousands of people from locations as far as Iceland, New Zealand, Kazakhstan and the Philippines. The data, he admits, is skewed since the site only reaches English speakers. He plans to the translate the site into Chinese, which means he could get a flood of new data from the world’s most populous country. He says if you look at the data he has accumulated, a few things stand out.

“I caution anybody who looks at the Hum Map to not be distracted by the high concentration of points on the Eastern Seaboard of the US and, in particular, over in England. Over in England, it would appear that they’re being absolutely clobbered,” MacPherson said.

He also notes that Vancouver Island has a “significantly higher concentration of Hum reports.” 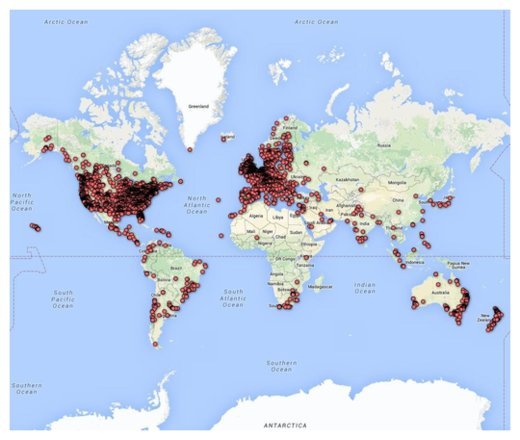 © The Hum Info
The World Hum Map and Database Project.

So what is the Hum?

MacPherson says the Hum may be a relatively recent phenomenon, with a significant number of reports first emerging in the late 60 and early 70s.There are three major theories as to what is causing the Hum. The main suspect is very low-frequency (VLF) radio emissions that are used by the military to communicate with submarines.

“When I say VLF, I’m not referring to sound,” MacPherson said. “That leads to another striking and startling conclusion, the fact that the Hum may not be a sound in the traditional sense. It may be the body’s reaction to a particular band of radio frequencies. That’s not an outrageous idea. The concept that the body can interpret certain electromagnetic frequencies as sound is reasonably well-established in research literature.”

Another theory is that the World Hum is “nothing more than the grand accumulation of human activity” that could include noise from highways, marine traffic, mining, windmill farms, hydroelectric dams and other forms of industry.

In 2014, a federally funded study confirmed a humming noise in Windsor, Ont., known as the Windsor Hum, emanated from an island across the Detroit River. An acoustic monitoring study showed the rumbling was real and reached Windsor from heavily industrial Zug Island in River Rouge, Mich.

However, the investigation – done by scientists at the University of Windsor and Western University – failed to pinpoint just what was causing the phenomenon. A third theory is that the noise stems from geological processes at work.

Then there’s the idea that people who hear the Hum are just suffering from tinnitus, a medical condition that results in a ringing of the ears. David Demings, a University of Oklahoma professor who was one of the first researchers to examine the Hum, noted that “Hum symptoms are distinctly different from classic tinnitus. Tinnitus is typically a high-frequency ringing sound — not a low-frequency rumble.”

“What I always like to point out about tinnitus is that it’s self-reported,” MacPherson said. “There is no external metric for it. If we believe that tinnitus is real, then the question is what differentiates it from reports of the World Hum?”

There are plenty of other more far-fetched theories out there, and MacPherson has heard them all.

“Whenever you’re dealing with something unexplained, it invites all manner of people who have creative ways of interpreting reality,” he says diplomatically.

Part of his work, he says, is using his science background to separate plausible theories from crazed conspiracies that circulate online.

MacPherson understands that some might think that he is no different than some of the conspiracy theorists who visit his site. But he says his dedication to the scientific method is what separates him from the tinfoil-hat crowd.

What’s in the box?

A recent article in the New Republic outlined MacPherson’s experiment with a so-called Deming Box. Named after the professor who first delved into this phenomenon, the steel box is designed to “create within it a VLF radio free space.” If a person who can hear the Hum gets into the box and no longer detects the noise, that could suggest VLF radio waves are the culprit.

Shortly after the article was published, MacPherson got inside the box to see what would happen. He said he got “mixed results” and plans to move the box to an undisclosed location on the Sunshine Coast and try again.

“If I get a positive result, I’ve got a handful of volunteers on the Sunshine Coast who can hear the Hum and who are ready to go in as well,” he said.

He also plans to continue maintaining the database, which he says has helped him connect with people who are also looking for answers.

“There are large numbers of perfectly sensible, everyday individuals and this is what we all have in common. We can hear this noise.”