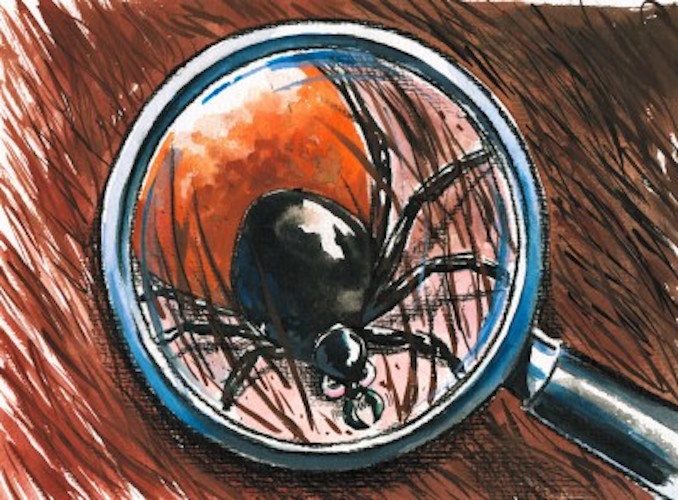 – “…According to Mike Stagman, PhD -“Genetic Engineering is a nightmare technology that has already caused MANY disease epidemics — documented but unpublicized”:

Today, we see horrific manifestations of a sick society with zombie-like heartless acts of violence. We are seeing creepy emerging emerging pathologies, new assaults to immunology, science fiction mad scientists, and technology with disturbing self-serving agendas. There are many people suffering beneath the veneer of shopping malls, latest gadgetry, and the illusion of connection through plastic. You won’t be seeing this on your TV News station any time soon, if ever.

Many have heard of Morgellons disease, Lyme Disease, and GMOs, but, none appear to be ‘main stream news’. Morgellons Disease has been labeled as a ‘delusional’ disease, or as the ‘mystery skin disease’. (Morgellons is the strange manifestation of unusual fibers seen in skin lesions that itch, and appear to ‘move’. People with the affliction describe a crawling stinging sensation, just under the skin. They also suffer from brain fog, and depression and other debilitations). Lyme Disease manifests as plethora of symptoms, often misdiagnosed. And GMO (genetically modified) foods are sneaking into our food sources without our knowledge or consent. The studies more often than not question the safety of ingesting the tampered engineered foods.

In 2008, the Centers for Disease Control and Prevention paid researchers $300,000 to conduct a 3 year study on Morgellons. Thousands of people suffer from this. Fibers under the microscope (100x) have a unique arrangement of blue, red, white green and fluorescent. What?

The latest research, indicates a surprising link according to the paper published in January 28, 2013 by Peter Mayne of Australia (principal author), found that Borrelia Spirochetes was found in the skin lesions of Morgellons victims. Surprisingly this bacteria, has been also been associated with Lyme disease. In fact, this research paper, suggests changing the name of Morgellons disease, to Borrelial Dermatitis.

According to other researchers in New York, (State University of New York) it is suggested that environmental factors might also be involved in this disturbing disease. They suggest that the fibers are biological with floral root-like structures, and could be from cross contamination of DNA from plants and humans through GMO’s.

Some physicians are suggesting that Morgellons is an unusual morphing of Lyme disease. This is a revolutionary connection, presenting a differential diagnosis, and could de-stigmatize the current delusionary assessment of Morgellons, the debilitating disease.

According to the Morgellons Research Foundation, there are well over 15,000 self-identified sufferers from 15 countries including the US (all 50 states), Canada, the UK, Australia, South Africa, and the Netherlands. In the US, most cases are reported from California, followed by Texas and Florida. The numbers are rising, not declining.

There are increasing new resources for ways to recognize these diseases, and for ways of maintaining a stronger immune system.  Strengthening the immune system, by reduction of toxic assault, is an important way to create a barrier from emerging disease regardless of their origin (synthetic or natural). Learn how to avoid the poisons, creating your own barricade, of your mind and body. It is your time to be proactive, not passive…. if you want to thrive in a changing world.

Anne Gordon is an RN, an Author, Researcher, and a computer artist. Fascinated with societies, and the future, she is drawn to medical health trends of tomorrow. What will health look like? Will we be more mechanical than spiritual? These are some of the concepts she is looking at. Many of her articles like her art, are slightly outside the mainstream box, aimed towards thought stimulation. She is also extremely curious about how the ‘business’ of healthcare, and wellness intertwine today.

Her artwork, is a combination of photography and painting, and is publicly shown. In her spare time, she teaches in a local community college.

Since the Clinton administration made biotechnology “a strategic priority for U.S. government backing” (1), giant transnational agri-business concerns have aggressively taken over the global food chain by flooding it with Genetically Modified Organisms (GMO) without regard for the consequences to the earth or its inhabitants. This takeover not only has the potential for global economic devastation, but threatens the earth’s population with far-reaching health concerns as well. One health concern that seems to coincide with the GMO revolution is Morgellons disease. What if the advent of Morgellons disease has something to do with the ingestion of GMO foods?

Morgellons Disease – What is it?

Very little can be found regarding this disease. Originally, sufferers were told that their problem was imaginary. This was of little comfort to the people who were suffering.

Morgellons Disease sufferers report strange, fiber-like material sticking out of sores or wounds that erupt on the skin. This is accompanied by painful, intense itching, that has been described as “an ever present sensation as if something is crawling under the skin.” (2)

On May 18, 2006, KGW, a local news channel reporting out of the Oregon area published this story:

[Dr. Drottar] The disabled family practice doctor felt like bugs were crawling under her skin.

“If I fully tell people what has gone on with me medically, they think they’re in the twilight zone,” said Drottar.

She woke up with the feeling that fluid was flowing just below her skin. Often black or blue hair like fibers protruded from her skin, she said.

“I thought I had been exposed to asbestos. I thought I was having asbestos fibers come out of my skin. I was pulling long, thin, small hair-like fibers that were extremely sharp that could literally pierce through my finger nails,” Drottar said.

In addition to the feeling of bugs and the fibers, Drottar also suffered from severe depression, chronic fatigue and a weakened immune system. As a result, she had to give up her family practice, Drottar said. (3)

Morgellons and GMO – the Link

Little information has been revealed concerning the long-term health effects of GMO crops on humans or animals, and even less information can be had regarding research correlating Morgellons with GMO foods.

This is suspicious right off the bat, because it would seem that there would be a natural curiosity regarding a link between Genetically Modified Organisms that people ingest regularly and inorganic fibers that protrude from a person’s skin.

This would be right up a geneticist’s alley, and quite worthy of intensive research.

So, why aren’t there a ton of published studies?

Why is it so difficult finding anything related to this?

Could it be that companies such as Monsanto have enough clout to effectively squash these stories?

If they have enough clout to ruin countries by deceiving impoverished farmers into purchasing patented GMO seeds, and then take it a step further and force these poor people to purchase seeds year after year instead of harvesting their own, then they have enough clout to ask our more than willing corporate government to manipulate the press…again.

According to Mike Stagman, PhD,

“Genetic Engineering is a nightmare technology that has already caused MANY disease epidemics — documented but unpublicized.” (4)

The following article by Whitley Strieber published on October 12, 2007, titled “Skin Disease May Be Linked to GM Food”  concludes that the fibers taken from a Morgellons sufferer contain the same substance that is “used commercially to produce genetically-modified plants.”

Many people—and most physicians—have written off Morgellons disease as either a hoax or hypochondria. But now there is evidence that this mysterious disease may be REAL and related to GENETICALLY MODIFIED food!

The skin of Morgellons victims oozes mysterious strands that have been identified as cellulose (which cannot be manufactured by the human body), and people have the sensation of things crawling beneath their skin. The first known case of Morgellons occurred in 2001, when Mary Leitao created a web site describing the disease, which had infected her young son. She named it Morgellons after a 17th century medical study in France that described the same symptoms.

In the Sept. 15-21 issue of New Scientist magazine, Daniel Elkan describes a patient he calls “Steve Jackson,” who “for years” has “been finding tiny blue, red and black fibers growing in intensely itchy lesions on his skin.” He quotes Jackson as saying, “The fibers are like pliable plastic and can be several millimeters long. Under the skin, some are folded in a zigzag pattern. These can be as fine as spider silk, yet strong enough to distend the skin when you pull them, as if you were pulling on a hair.”

Doctors say that this type of disease could only be caused by a parasite, but anti-parasitic medications do not help. Psychologists insist that this is a new version of the well-known syndrome known as “delusional parasitosis.” While this is a “real” disease, it is not a physically-caused one.

But now there is physical evidence that Morgellons is NOT just psychological. When pharmacologist Randy Wymore offered to study some of these fibers if people sent them to him, he discovered that “fibers from different people looked remarkably similar to each other and yet seem to match no common environmental fibers.”

When they took them to a police forensic team, they said they were not from clothing, carpets or bedding. They have no idea what they are.

Researcher Ahmed Kilani says he was able to break down two fiber samples and extract their DNA. He found that they belonged to a fungus.

An even more provocative finding is that biochemist Vitaly Citovsky discovered that the fibers contain a substance called “Agrobacterium,” which, according to New Scientist, is “used commercially to produce genetically-modified plants.” Could GM plants be “causing a new human disease?” (5)

The giant transnational corporations behind the GMO revolution are hitting us in our most vulnerable spot – our bellies. Most people have been brought up with an innate trust that what they purchase from the stores is safe to eat.

This is no longer true, since most processed foods contain genetically engineered ingredients that can have disastrous effects on both animal and human health.

What you purchase from the corner store might just change your DNA and create such frightening symptoms that the general public simply does not believe it. What is worse is that when you go to the doctor to get help, he/she tells you what you are experiencing is all in your head. This is rubbish! It is up to people who care to make the correlations between what we eat and what happens to our bodies. Remember the old saying – “you are what you eat?” Well, this author believes it is true.

Barbara H. Peterson is a Writer and Activist,
http://spktruth2power.wordpress.com